Tales of the Defender: Volume 4 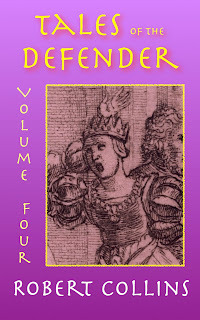 The fourth print volume of Defender stories is now out. Here's what's inside:

This volume contains the fourth group of five Defender stories. The students of the Defender and the Moon Spirit are becoming Defenders in their own right. They’re using magic to protect the innocent and bring down the guilty, however powerful the guilty might be.

Also out is The Defender Chronicles, Volume 2. This is the ebook edition of Tales Volumes 3 and 4. As I said a while back, Volume 1 will be out later in the summer.

You can find store links to all the Defender works on the Defender series page.
Posted by Robert Collins at Monday, April 11, 2016