Tales of the Defender: Volume 3 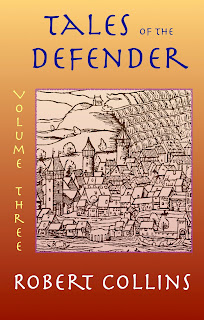 The next print volume of the Defender series is out:

This volume contains the third group of five Defender stories. The students of the Defender and the Moon Spirit are becoming Defenders in their own right. They’re using magic to protect the innocent and bring down the guilty, however powerful the guilty might be. They’re also expanding the knowledge of magic to rebuild what was lost when the time of the Great Mages ended.

The collection is now on sale. Volume 4 and an ebook collection should be out next month. Check the Defender page for store links.
Posted by Robert Collins at Monday, March 07, 2016 No comments:

Here's the second post on how much I'm writing this year.

February seemed to go about as well as January did, with one exception. I had to spend most of the last week of the month editing Defender stories for the fourth print volume and the upcoming ebook compilation volume. That means I wrote 160 pages in February. That's only two dozen pages off what I could have written if I'd met my session goals all month.

Nothing special is coming up for March. That said, I might pause the writing a bit to do take care of more book formatting for the future. Better now rather than later.

One last thing: I'm no longer posting daily writing updates on my social media. Instead I'm doing weekly posts every Monday. Check the links on the right to follow me.
Posted by Robert Collins at Tuesday, March 01, 2016 No comments: