I have a new short story collection out, No Easy Futures ---

This is a collection of stories that will make you think about yourself and the choices you make. There are few simple solutions to the problems raised in these pieces. Still, the characters try to overcome the best they can. Among the stories included are:

The Last Medal Winner: Reporter Vivian Ferris speaks to a war widow, who tells him that her late husband never received the medal he was awarded. Can Ferris find justice for the deceased in a time of peace?

Quincy Darby’s Discovery: Quincy Darby has learned that history can be altered. This might end the time travel that society relies on. After announcing his discovery he’s accused of murder. Can he prove his innocence?

Black: A newsman is told than an old friend, a lawman, was killed while committing a crime on a colony planet. The friend was no crook, and the newsman is suspicious. He travels to the planet to learn what happened and why.


This collection is available in print and ebook editions. I hope you'll check it out. 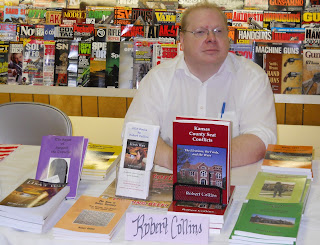 On Saturday, June 15, I went to Emporia to take part in the Author Extravaganza put on at Town Crier Books in Emporia. This was the first time I was able to make it in a couple of years.

This time around I was seated with some other SF/F authors. None of my books sold at the event, though the store did restock my nonfiction titles. It was good to see the authors there, but also to see a few readers who were interested in SF/F. I mentioned the upcoming cons to the authors, so I'm hoping to see some of them again this year.

While I was there I found out about a book festival in northwest Kansas. I'm putting in for a table for it. The trip out will give me some time to hit some libraries and museums in that area with Kansas County Seat Conflicts. I worried about having to make a special trip at some point to visit those places; now I won't have to. 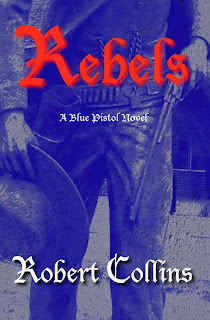 Rebels, the third Blue Pistol novel, is now out. Here's the blurb:

The Blue Pistol and his allies have freed a few dukedoms in the Settled Domains from the power of the Slavers Guild. Those gains must be protected, & more people must be freed from slavery.

Two dukedoms are targeted to advance the cause: Black Rapids & Saint’s Hope. One will see an attempt at rebellion; the other, an attack by lies and hard truths.

Can the Blue Pistol liberate more land from control by the Guild? Can more nobles be trusted to see the value in ending slavery? Can the common people of the Domains be trusted to take the reigns of power?

The novel is available in print and as an ebook at all the usual places. I hope you'll check it out.
Posted by Robert Collins at Monday, June 03, 2013 No comments: