I've completed my first book events of this year. Let me take a moment to tell you about them.

The first was back on March 2. That morning I went to the Midwest Historical & Genealogical Society in Wichita to speak about Kansas County Seat Conflicts. Since it was a Saturday morning, there weren't too many people there. I talked about the book, some of the conflicts in the book, and what the implications of that history could be on the future of Kansas. After the formal talk was more chat about Kansas history. I was able to sell some books there, and I think I might have hooked someone into picking up my Jim Lane biography. It was a nice way to formally kick off a new round of signings, book talks, and conventions.

Then on March 12 I spoke at the Marion City Library. Naturally there were a few questions about whether the brief fight between Marion and Hillsboro over the county seat played a role in the two towns' rivalry. Here's an oddity for you: one person arrived late to the talk. She came in while I was relating the story of how Harper County was established, the unsavory nature of which figured into the county seat battle there. It turned out that she was originally from Harper County!

The last event in March was at the Bookshelf in McPherson on Saturday, March 23. I was there with another author, a local woman who had written an inspirational book. It was her first book, and the event was her first book signing. I'm glad that friends of hers came in and bought her book. I've been doing this for so long that I forget how exciting the first event for your first book can be.

So, the first month promoting Kansas County Seat Conflicts is over. I have more events this spring, including my first SF con of 2013. Here's hoping for a fun and busy year!
Posted by Robert Collins at Monday, March 25, 2013 No comments:

The second Frigate Victory short story collection is now out. It's subtitled for one of the stories in the collection, Pirates and Diplomats. Here's what it's about:

Major Anita Duncan learns too late of the assassination of the President of Extra-Solar Alliance. She has turn to Captain Jason Ayers of the Terran Federal Republic for help. Duncan and Ayers forge an alliance of humans and aliens to deal with the threat posed by the coup in the ESA.

What will this struggle mean for the future of the galaxy? Can Duncan, Ayers, and their new friends bring freedom and justice to the ESA?


The collection is in print and ebook editions. Here's where you can find it:

I hope you'll get a copy. Thanks for your support! 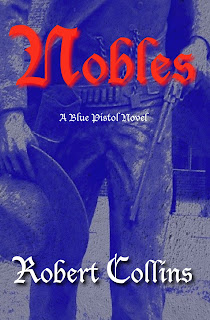 I have a new Blue Pistol novel out, Nobles. Here's what it's about:


"We must have allies in the Domains," Cassia says to Bart. That means convincing members of the nobility that the Slavers Guild cannot be trusted, and the notorious Blue Pistol is no threat to their rule.

To that end, they kidnap Cornelia, the daughter of one Duke. They show her that her father is treating her like a trinket given to curry favor. Will she get the chance to prove her value to cause of ending slavery?

They also send a merchant and a wizard to the realm of Duke Avitus. These newcomers bring a message of freedom. Will Avitus listen to their message, and risk the anger of the Guild?


Nobles is available in print and ebook editions. Here's where you can get it: