The Story's Story - Protection for a New Age

This is another post about how of my stories came to be. This time I'll talk about Protection for a New Age.

The idea behind this story is that the force that's used to cast magic spells has declined over the centuries. By the time the story starts, wizards and enchanted items are the stuff of myth and legend. The characters discover that this magical force is getting powerful again. Their society is on the verge of a new age of sorcery.

This concept of magic gaining or losing strength over time came from one of the rulebooks in the third edition of GURPS. It was one of several suggestions offered in the book to gamemasters who wanted to introduce freshness into their campaigns. If magic was unpredictable, players might be challenged to create more interesting characters, or have adventures that contained more surprises.

I've found over the years that role-playing games can offer interesting ideas for stories. The adventures themselves aren't usually where the ideas come from. Adventures and campaigns tend to follow the conventions established in their genre settings. Instead the story ideas come from thinking about the settings of campaigns, and the suggestions for creating settings and adventures that surprise players.

Early in this story the characters fight a magical creature. That's pretty typical for a fantasy story. Yet there isn't a character who knows magic when the story begins. That's a signal to the reader that this story might not be what they expect. It's unusual, and I hope interesting. That's what makes for a good story.

Please let me know if you enjoy this series. Talk to you again soon!
Posted by Robert Collins at Monday, August 20, 2012 No comments:

Here's the second post about how one of my stories came to be. This time I'll talk about one of the Frigate Victory stories, Dramatic Solution.

The Victory stories began as my effort to create something in the vein of Star Trek or Babylon 5. I wanted my stories to be more grounded. There would be no grand myths, and the duties of the ship and crew would be clearly defined.

The first Victory story written was actually a film script. It was the crew's first adventure together, and involved an encounter with a pirate. That's all I remember of the script. The pirate captain character was interesting; he's one of the elements that I brought in for this story. A second element ended up being hinted at: Captain Ayers uses a bit of deception to capture the pirate's ship.

Another element that drove Dramatic Solution was the idea that Victory had to protect a planet of low-tech colonists from the danger of pirates. The problems were that Victory (nor any other warship of the Terran Federal Republic) could remain in orbit, nor could Captain Ayers build some sort of automated satellite to do the job. I think the idea Fournier comes up with to protect the colony is quite clever.

In this story, the main battle takes place off-stage. While writing the story I realized that describing the battle would only take up space. The battle wasn't important to the plot. What was important was that the pirate ship that Victory bests is one of several under the command of the pirate captain. Adding to the complication was why that one ship was in orbit around that particular planet.

Battle scenes can be exciting. But in a short story, you only have so many pages to tell the tale. A battle that isn't absolutely essential to the plot wastes space. Wasting space will waste the reader's time.

I hope this gives you more insight into this story, and in how I write. If you like these posts, please let me know. Thanks!
Posted by Robert Collins at Monday, August 13, 2012 No comments: 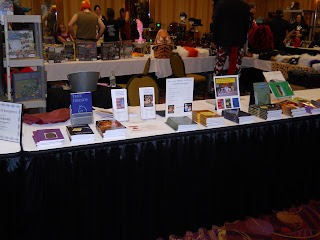 This time, instead of sharing a table with other authors, I bought my own table in the dealers room. I never did have a neighbor to my left. For part of Friday, on my right were two girls selling buttons. They moved sometime after setting up to be near another dealer that they knew. On Saturday that table was occupied by the local reading charity that the con supports. As it happened, I was next to that charity and the woman who represents it at OSFest last year. She was only there for Saturday, so on Sunday I had no neighbors.

I didn't sell quite as many books this year as last year. Last year I sold 17 books; this year, 12. However, it wasn't as easy to get to the dealers room this year as it was at OSFest 4. Things were slower in the room this year. Still, I reached par for a con. As far as sales went, I'm happy.

I didn't contact the programming person so I had no plans to take part in any panels. I saw Guy Anthony De Marco in the dealers room; I first met him at ConStellation. He graciously allowed me to take part in two of the Saturday night panels he was on. I had fun on both. I do wish the other authors on the panel had the time to get to my table so we could talk a bit more.

Overall I had a great time at the con. I plan to keep going back as long as they'll have me.

Sadly, something flared up my sinuses around that weekend. I developed a head cold and wasn't able to attend GlitchCon. I do have one more SF con on my schedule, Encounters right next door to me in Wichita.

For the next few weeks I'll put up posts on various subjects, then even reports through the fall. We'll see if there aren't some other posts I can add to the schedule.

Thanks for your support, and stay tuned!
Posted by Robert Collins at Monday, August 06, 2012 No comments: