In the previous post, I told you what cord-cutting was, and why it's on my mind. Now I'll talk about how cable is (and isn't) fitting into my life.

There's very little tying me to cable TV right now. There are all of two TV series that I watch on a regular basis: Doctor Who and Tiny House Nation. The latter might not be a problem, as video and episodes are posted at their website. The former is trickier; to get new episodes when they air, I'd have to subscribe to the series at iTunes or a similar service, which means paying for episodes I may or may not like. The only channels I watch daily are a few of the Music Choice genre channels. Other than that, there are a handful of channels I tune into weekly for perhaps an hour or two each week. I do sometimes watch movies when they come to HBO, Cinemax, or Epic. I do channel-surf on occasion, but it's not really how I watch TV, and sometimes the surfing drives home the point that there isn't much on that I want to watch.

Indeed, much of my entertainment time (and the programs that I like to keep informed about what I'm interested in) is spent listening to or watching podcasts. For that I have the Podcast app on my iPhone, and the Podcast channel on my Apple TV. There are also some video-blogs (vlogs) I watch via YouTube, and I follow a few YouTube content creators. As I said in the last post, I'm a Netflix subscriber, and I could add Hulu to that if I want to. As far as news: I have the Circa app on my iPhone; I have some local news outlets on a Twitter list; and there's what gets shared by my friends on Facebook.

That does lead to the one source of entertainment that I can't get anywhere else but from cable: Music Choice. I use a few of their genre channels as background music during the day. Right now the Radio channel on my Apple TV gets internet radio stations, all of which are add-supported (and the channel app isn't as good as it could be).

However, I have taken a step towards dealing with that concern. I'm now a subscriber to Calm Radio.
It's an online streaming music service with a wide variety of channels. Not only does it have several classical music genre and mix channels, it has specific classical music composer channels. There's also new age music, world music, and jazz channels. The tricky part now is that I can get Calm Radio's music channels through my MacBook Air and iPhone, but not through my Apple TV, since there's no Calm Radio Apple TV app. There are rumors of an Apple TV refresh coming, so that could change.

You might be wondering if I've looked at the various streaming music services out there, like Pandora and Spotify. I have, and I'm not interested in them. While I'm not a huge music fan, I am willing to buy what I really like. I stopped listening to commercial radio some 25 years ago because, more often than not, I heard what I didn't like more than what I liked. I pretty much own all the rock and pop I want to hear. There are a few genres where I know I'll buy more, but they're the sort of less-popular genres that I found didn't work out on those streaming services. That's just me, of course; you mileage will almost certainly vary.

At the end of this thought experiment, I have to say that yes, I think I could be a cord-cutter. Not much at this point in my life is tying me to cable TV. As long as I have high-speed internet, I can get almost all of the audio and video content I want.

I hope these two posts have got you thinking as well. If so, post your thoughts at your blog, and let everyone know (including me). Thanks for taking the time to read this!
Posted by Robert Collins at Thursday, February 19, 2015 No comments:

The movement the podcast reflects is that of "cord-cutting." The idea of cord-cutting is cutting the cable TV cord, and watching what you want via online services like Netflix, as well as streaming services and what you own or can rent. It's still a small movement, but it is growing. Most cord-cutters are in their twenties; some are called "cord-nevers" because they never subscribed to cable since becoming an adult. That said, more and more older age groups are taking the plunge; the hosts of Cordkillers are both around 40.

I've been thinking about whether or not I could cut the cord since I started watching the podcast. This blog post was inspired by a friend who just subscribed to Netflix and Hulu. I already have Netflix, and would like to know her experience with Hulu before I subscribe.

Let me say right off that I can't cut the cord at the present time. I'm living with my mother, and I doubt she'll ever want to give up cable. For now this more a thought exercise for me than something I could seriously consider doing.

If you're not familiar with cord-cutting, you might be wondering why anyone would want to get rid of cable, or would never subscribe. For one thing, there's the expense. If you want anything more than a basic cable package, you have to pay at least $75 a month. Watching Cordkillers, I hear people mention bills of $100-$150 a month. While that usually does include some form of high-speed internet, it's still a lot to pay.

What are you paying for? That's another reason for cutting the cord. You pay for basic channels that you never watch. The idea for this is that supposedly most cable channels would never get enough subscribers on their own to to pay for delivery to those who would want them. We pay for a broad spectrum of channels so that everyone can (in theory) find channels they like.

Beyond the problem of paying for channels you don't like (and may not want to support), mobile technology and internet video are changing this equation. Channels can now create mobile apps; the next step will likely be making them subscription apps to send their content to those who want it. Internet video allows anyone to create content, making it available everywhere, and find fans willing to support their work.

This is the cord-cutting landscape as it stands now. In the second post, I'll tell you how the landscape affects this thought experiment in my particular case.

Posted by Robert Collins at Tuesday, February 17, 2015 No comments: 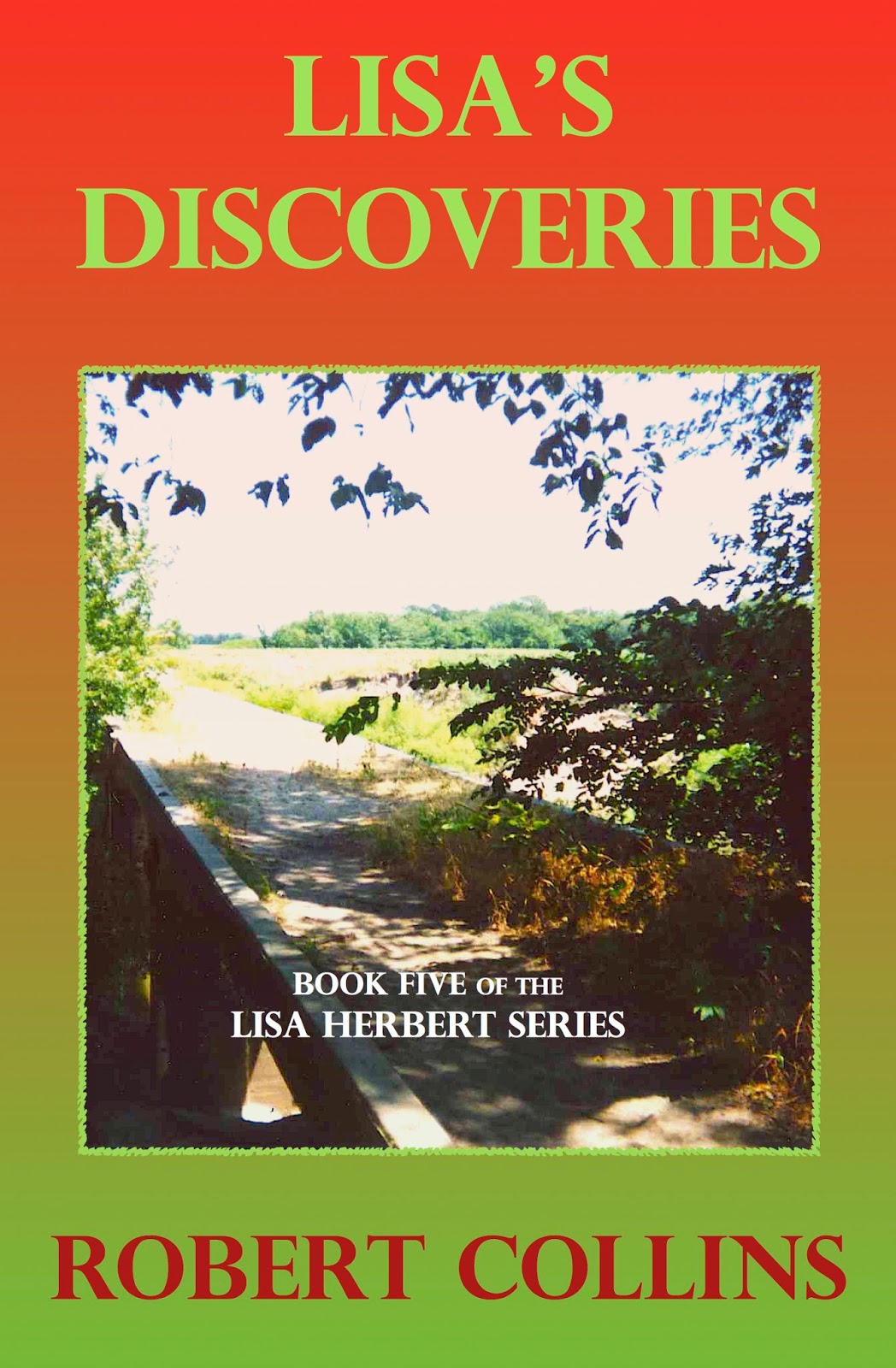 The fifth and final book in the Lisa Herbert series, Lisa's Discoveries, is now out. Here's what it's about:

Another year brings another handful of planets for Lisa to visit, as her struggle to rebuild society generations after the “Savage Rain” continues.

These journeys won’t be like any other Lisa and her friends have taken. One world was devastated by a mysterious disaster in the past. On another world, an ancient machine is still running. And past that second world is Earth.

Why didn’t Earth stop the Savage Rain? Can they help Lisa’s effort? What will Lisa discover when she goes through that last hyperspace gate?

The novel is available in print and as an ebook at the usual stores. In addition, the ebook edition of the first novel, Lisa's Way, is now free at Smashwords, and will be soon at other online stores.
Posted by Robert Collins at Monday, February 09, 2015 No comments:

It's a new year, so here's the first post of the new year, detailing my writing progress for the first month of 2015.

For various reasons, there were days where I didn't write much, or only wrote during one session instead of the two sessions a day. On the other hand, when I did write, I wrote quite a bit, almost as if I was trying to make up for what work I didn't accomplish.

So, in January I wrote 165 pages. That's a pretty good number, but about 30 pages under what I could have done, if I'd written 4 pages during every scheduled session. Still, that's not a bad total to start the year. We'll just see how I keep the totals up considering how busy this year is shaping up to be.
Posted by Robert Collins at Monday, February 02, 2015 No comments: