I have a new Gwen Conner fantasy/mystery short story out. Here's the blurb:


Gwen Conner is back in this new story. She’s asked by the younger sister of a man accused of train robbery to help her brother. The sister insists her brother would never rob a train. Gwen learns that the take from the robbery was small, and passengers on the train weren’t questioned by police. What will be revealed when Gwen untangles the loose threads of this mystery?


It's in ebook form, and first of a new batch of Gwen's stories that will be available this year. Here's where you can find it:

Enjoy!
Posted by Robert Collins at Thursday, January 24, 2013 No comments:

I have a new Frigate Victory short-story ebook out, called "Open Eyes." Here's what it's about:


Major Anita Duncan stumbles across a coup to replace the President of Extra-Solar Alliance. She fails to stop the coup, and must seek sanctuary in the Terran Federal Republic. Will meeting Captain Jason Ayers and the leaders of the Republic show her a way forward during this interstellar crisis?

This short story was first published in "Just Because" in September, 1998.


This is one of two (and maybe more) stories going up this year, and part of a collection that will be released later this year. The ebook is on sale at:

Thanks for taking a look!
Posted by Robert Collins at Monday, January 14, 2013 No comments: 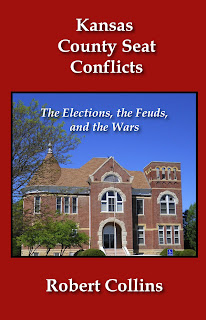 Here's what the book is about:


Since the establishment of Kansas Territory in 1855 well into the Twentieth Century, communities have fought over the privilege of being named the county seat. Over 60 of the state’s 105 counties have seen some attempt, successful or not, to move the county seat from first designated site.

Some have been brief, like the two-month effort in Reno County. Some have been long, like the eight-decade struggle over the seat of Logan County. And some have become notorious for their violence, like the battle between Woodsdale and Hugoton in Stevens County.

Kansas County Seat Conflicts recounts all the fights that author Robert Collins was able to document and research. There are fascinating period newspaper accounts, as well as analysis on the causes of these fights. Collins also considers what lessons can be drawn from these many and varied conflicts. This book also contains maps of the counties mentioned.

The book is only available as a print book. Trying to make the maps come out right in an ebook was going to be too much of an effort for not much reward.

Here's the link to it at Amazon.

I plan to give book talks and do other events to promote this book through this year and probably into next year. Once I've done the last event for KCSC, I believe that will be it for me as far as nonfiction goes. I've run out of projects that I feel passionate about.

More of my works will be going up this month, so stay tuned!
Posted by Robert Collins at Tuesday, January 08, 2013 No comments: