The Defender: The Black Ghost 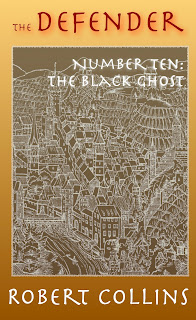 Word has reached Crown’s Hold of a dangerous new outlaw, “The Black Ghost.” For some time, the Black Ghost has been stealing from travelers on roads in the eastern dukedoms of the Kingdom. Now the outlaw has robbed a merchant’s home in one city, and has killed a band of thieves in another.

Queen Elspeth sends Allan and Nancy, “The Defender” and “The Moon Spirit,” east to hunt down the Black Ghost. But while they’re searching, another murder happens in a third city.

Who is the Black Ghost? Is there a motive behind these crimes in separate cities? Can the Defender and the Moon Spirit capture the outlaw before he strikes again?

Like the rest, this is available as an ebook. Check The Defender page for store links.

Also, the next print compilation volume, Tales of the Defender, Volume Two, is now on sale. This combines the sixth through the tenth stories into a single print book. Check the page for store links for that as well.
Posted by Robert Collins at Monday, November 09, 2015 No comments:

Here's the latest update about how much I've written.

October was an odd month for me. I lost some writing sessions due to a convention, mainly being a bit worn out by it and having to take care of errands the con got in the way of. On the other hand, I wrote two novellas in my new steampunk series.

(My thinking is to release both separately as ebooks, then combine them into a single print volume. That release is over a year away, so nothing's set in stone right now.)

So, I wrote 101 pages in October. That's a little more than half of what I could have written without the interruptions.

I don't know that I'll get all that much done in November. I have two conventions to attend. I also have works coming out next year that I'll have to edit. I should be able to get some writing done early in the month, and probably late in the month. Here's hoping for some good progress!

One last thing: if you're taking on NaNoWriMo, good luck and good writing!
Posted by Robert Collins at Monday, November 02, 2015 No comments: