On Saturday, November 24, (yes, the Saturday after Thanksgiving), I went up to McPherson to do a book signing at the Bookshelf. I was there with several other authors.

It was a fun morning. I chatted with two of the authors there about book promotion. I sold a handful of copies of my nonfiction books. The store took a few more for their stock. I had a proof copy of my next nonfiction book, Kansas County Seat Conflicts. Everyone who saw it was interested in it. The store's owner was able to find the section on McPherson County, and I told her that I was able to find out about the rumor about an attempt to renew the county seat question there in the 1880s. (It was something locals had heard about, but no one knew anything for certain about it.)

This was my last book event for 2012. Over this past year I attended 5 SF cons; had 8 book talks or signings; and attended book festivals in Hutchinson and Topeka. I traveled quite a bit in eastern and central Kansas, and went to Lincoln, Omaha, and Oklahoma City. I met many people, and overall had a good time at all my events.

Next year promises to be busier than 2012. I expect to do more book talks because of Kansas County Seat Conflicts. I would like to get to one or two more cons next year; we'll see how that works out. Looking ahead, I plan to continue promoting KCSC through 2014. At that point I think my nonfiction writing career will go on hold so I can shift more of my energy to SF/F.

There should be one or two more posts this year, as I have two more fantasy books I plan to release. Things might be quiet the first couple months of next year, but I have more SF/F works I intend to put out early in the new year.

Until then, take care & keep in touch!
Posted by Robert Collins at Monday, November 26, 2012 No comments:

I have a new novella available, called A Somber Tale. Here's what it's about:


Four old friends, former officers in the army of their kingdom, gather one night. One them, looking haunted by his past, tells them of his meeting with a legendary warrior on the vast plains, his encounters with the Lizard Men, and what he knows of the powerstones that fuel magic.


Starting with The Valley Springs Resort in September, I decided that I would release both print and ebook editions of my novellas. Right now the ebook versions are 99¢; I might increase that price after the first of next year. The print editions are $5.00. I have one more novella that I plan to release this year.

I hope you'll take an interest in A Somber Tale. Here's where it's available:
Amazon
Smashwords

See you next time!
Posted by Robert Collins at Friday, November 16, 2012 No comments: 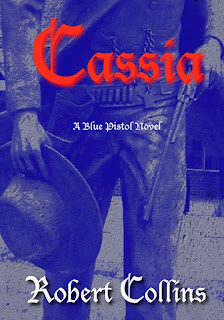 I have a new novel out, Cassia. It's the first Blue Pistol novel. Here's what it's about:


A young woman named Cassia, journeyman in the Slavers’ Guild of the Settled Domains, is tasked to capture a mysterious outlaw named The Blue Pistol.

Her encounter with him will shatter her life and subject her to physical and emotional agony.

But in understanding his battle and her own past, Cassia will seek to overcome her pain and prove that she can be of value to those who are willing accept her.


It's a dark story that I've wanted to get out for a long time. An early version of what is now the first chapter of the novel appeared in the online magazine Aphelion several years ago. Cassia is available in print and ebook editions.

Here's where you can get it now:
Amazon
Smashwords

Talk to you again soon...
Posted by Robert Collins at Friday, November 09, 2012 No comments: 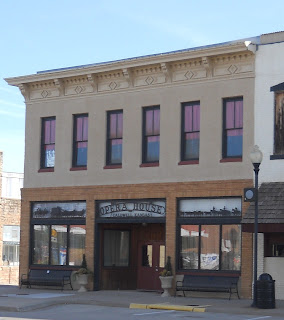 On Saturday, November 3, I did a signing at Slate Creek Books in Wellington.

A handful of people showed up, and they bought a handful of books, so that was good. I talked to the owners of the store about some of the area SF cons, and a few other topics like Wattpad. During the few quiet moments I did some editing on a Jake Bonner novella. It was a three-hour signing, but the time really flew by. I expect to do another signing there after Kansas County Seat Conflicts is published.

I didn't take the direct route to Wellington on the way down. I used this event as a chance to head back through southern Sumner County. I had been throughout the county back in the early 1990s when I had been publishing my Touring Kansas Counties books.

On this trip I drove through South Haven and Caldwell before going to Wellington. South Haven seems smaller than I remembered. Caldwell is looking good. The downtown buildings are being kept up. There are still historical signs around town. I noticed that the Border Queen Museum was in a different building than where it had first started 20 years ago.

That pre-signing side trip also meant that I've added another highway to the list of routes I've covered. I have now driven along US-81 from Caldwell to the Nebraska border. I am, slowly but steadily, driving across the length and breadth of Kansas once again.

As you can see, I have one more book event on the calendar for this year. The next two posts here will be about the latest books I have out, then I'll post a report about that last signing of 2012. Until then, take care!
Posted by Robert Collins at Monday, November 05, 2012 No comments: