A Lady Never Knows:  A police officer asks Gwen Conner to deliver a ransom to kidnappers. Can magic help Gwen avoid danger when she meets the kidnappers?

Gwen Defends A Creek: A small-town mayor hires Gwen for an unusual job. He wants trespassing fishermen kept away from a creek and harming the chances of the town's new recreation area. Can Gwen and her brother use magic to keep the trespassers away?

Gwen the Sleuth: While visiting a friend in another town, Gwen Conner gets involved in a murder at the home of a newspaper columnist. The problem is, the columnist had magic protecting his house. How could someone with hostile intent get in?

Cane and the Con: Gwen is hired by an insurance company to investigate a suspicious death claim. The stubby fields of sugar cane around the “dead man’s” hometown figure into the mystery. Can Gwen make everyone happy?

You can find both pairs of stories at Amazon and Smashwords. Both sell for 99¢. Yes, a Gwen Conner collection is coming soon.

Oh, there's also a freebie at Smashwords: The Best Days.
Posted by Robert Collins at Tuesday, June 26, 2012 No comments: 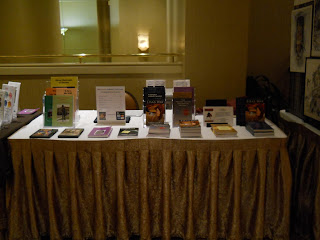 Over the weekend of June 15-17 I was at Soonercon 21 in Oklahoma City.

I had a table in the Arists' Alley. I did about average as cons go, in terms of book sales. I sold about a dozen copies of my books, including a couple of my Kansas history books. I also gave out several copies of my e-book brochures. I don't know if the brochures are generating sales, but I'll keep at them.

There were some familiar faces at the con. I did get to meet new people, including a few writers. I also met Peter S. Beagle, one of the major guests.

Once again I got the word out about Encounters to as many people as I could. It helped that this time two members of the Whovians of Wichita, who are also on the Encounters staff, were present. One was able to hand out flyers. I introduced a few people I knew to them. I hope all these efforts help come October.

I chose not to volunteer for any panels at Soonercon. Looking over the list, I don't think there were very many panels where I could have made much of a contribution. I also didn't do much in terms of staying up late. In fact, Sunday evening I actually napped for an hour, then slept 7 hours during the night!

Soonercon was at a Sheraton, but this hotel was much better than the Sheraton ConQuest was at. The food in the hotel restaurant & lounge was on the pricey side, but boy was it good! One of the wait staff told me she went to the con to buy art. Parking was inexpensive; I spent just over half what I had in Kansas City, yet was parked for one more day in Oklahoma City than in KC.

I hope I can return to Soonercon next year. I had a great time.

There's nothing on the schedule for another month. In the meantime I have a couple posts about ebooks, short stories, and a new collection in the pipeline. See you soon!
Posted by Robert Collins at Tuesday, June 19, 2012 No comments:

I thought I would start putting up some posts to explain how some of my stories came to be. If you like these posts, please say so in the comments, on Facebook, or by sending me a message on Twitter. I'll begin with one of my recent Gwen Conner stories, Spook Wagon.

Back in the late 1980s/early 1990s I wrote for two of Steve Jackson Games' periodicals, AutoDuel Quarterly and Pyramid. One of my articles for ADQ was a scenario idea involving a remote-controlled "ghost car" that was troubling a small town. The players would have the task of dealing with the car, as well as finding out why the car was "haunting" the town.

I had wanted to use the idea in a short story. It wasn't until I had created the character of Gwen Conner for Something About the Vegetables that I was able to pair the idea with a main character.

Since Gwen lives and works in a world with magic, the next problem was this: was the ghostly wagon a real wagon made to look that way, or was it an illusion spell?

Third problem: the reason why the "spook wagon" is employed. My first thought was the reason that Gwen discovers. However, that reason seemed too simple, and had the possibility that, if it was true, it could radically change the town. Thinking about it not only led to how the story does actually end, but allowed me to bring Gwen's brother back in and make him useful to the plot.

One of the lessons I learned from writing this story was that sometimes your first idea is the most obvious. The obvious idea rarely makes a good story. If you want a story to stand out, you might have to give that idea more thought.
Posted by Robert Collins at Friday, June 08, 2012 No comments: