Here's the seventh "writing stats" post of the year, letting you know how my writing output is progressing.

July was pretty steady, once I got back from SoonerCon. I wrote 115 pages this month. That is way down from what I could have written, if I'd stuck to my goals, which would have been 200 pages. I did have some errands get in the way, and I spent the last several days of the month formatting books for this year and next, as well as editing the latest Blue Pistol novel.

Which leads me to August. Right now I don't have any story ideas to work on. I have some vague notions about what to do. In one case, I need to do research before I can even come up with a plot. In the other case, I need to think of story ideas before continuing the series. There are things in real life I'd like to do, like catch up on shows, and head out on some day trips to take pictures.

So I'm going to pause in my writing for a while. I'm going to do research and think of plots, as well as do other things. I expect to be back at writing in a month or two. I will continue putting out work; in fact, I have enough books lined up that I can publish one a month until the end of 2015. I'll try to post my research progress at the end of August, and if I need to do more, in September as well.
Posted by Robert Collins at Thursday, July 31, 2014 No comments: 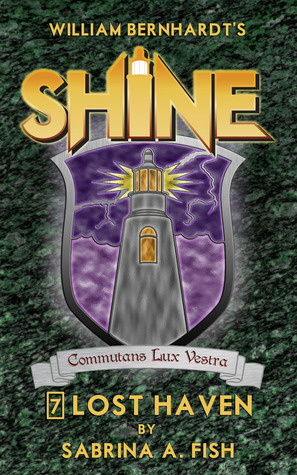 One of the authors I met at SoonerCon back in June was Sabrina Fish, author of the book Lost Haven, #7 in the series Shine by William Behrnhardt.

The premise of the series is at some point, perhaps in the near future, or in an alternate universe, young women between 15 and 25 begin developing unusual abilities. These strange talents, which seem psychic in nature, are called "Shine." The idea behind this series is that authors will write books about characters they create within this shared universe.

This book follows a young woman from Oklahoma named Camille. Her father is believed to have killed her mother, then himself. Camille has to deal with an ex-boyfriend, a mysterious thumb drive, and an organization determined to deal with Shines, all while she's coping with her own secret Shine.

The book is well-written and moves at a good pace. I didn't have any trouble following the shared world, even though I was reading the seventh book in the series. Camille's an interesting character, religious but not a closed-minded fool. If I have any complaint, it's that the book ends on something of a cliffhanger for the world, and somewhat for the character. I'm not sure about the rest of the series, but I would like to know what happens to Camille after she's gone through the events of the story.
Posted by Robert Collins at Monday, July 21, 2014 No comments: 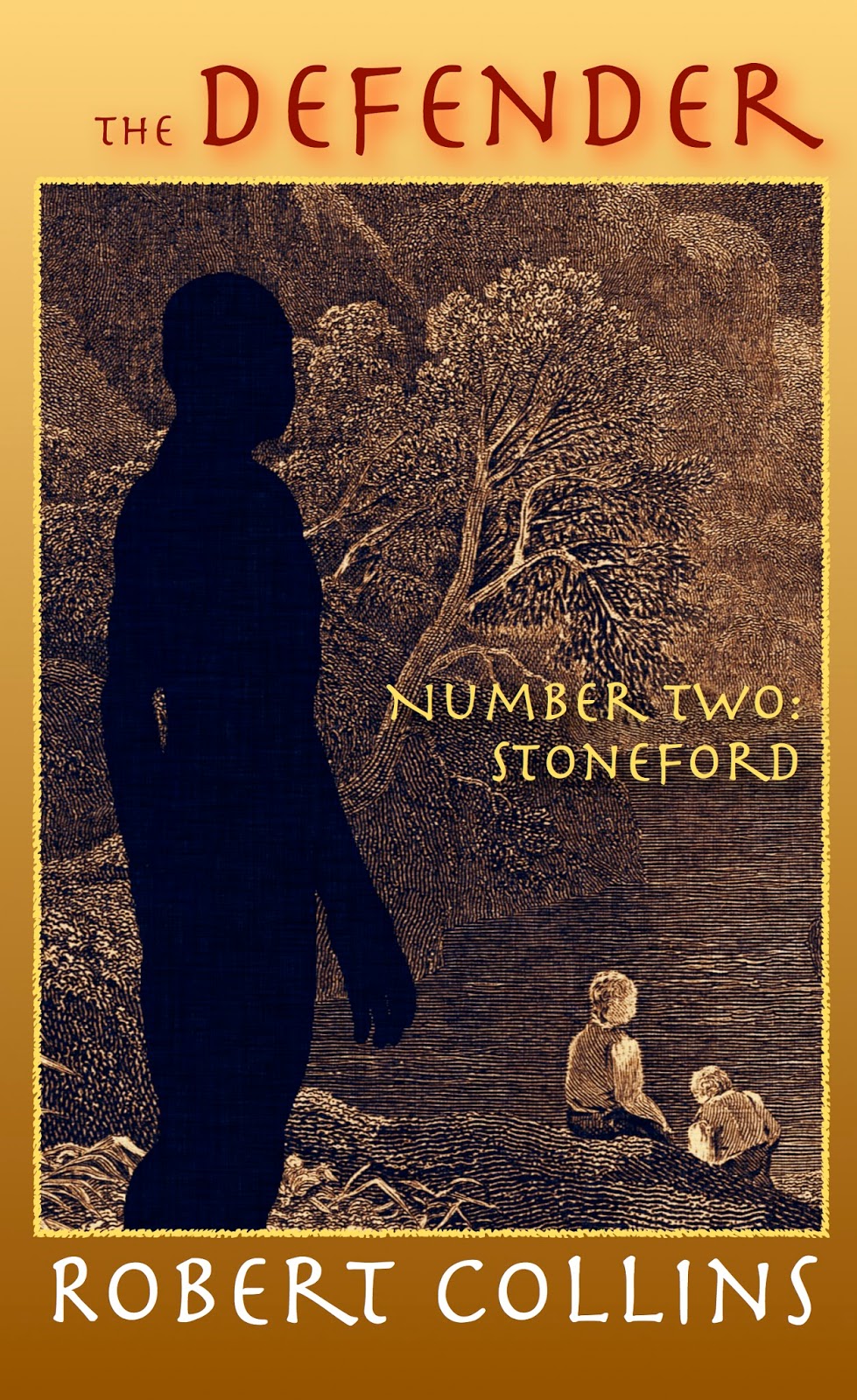 The second Defender story is now available! Here's what it's about:


Allan has moved to the dukedom of Stoneford to continue his work as the masked mage known as “The Defender.”

In Stoneford he learns that a man named Malloria has become an advisor to Lord Jason by claiming he can see the future. One of this Malloria’s predications was that doom would befall Lord Jason’s youngest son Kenneth. A few weeks later, Kenneth died of sickness.

Allan knows magic doesn’t work that way, at least not with most knowledge of casting spells gone. He suspects that this Malloria has a darker purpose behind his claim of seeing the future.

Who is this mysterious Malloria? What is he plotting? Can the Defender stop his scheme?

The book is available in print and ebook editions at Amazon, B&N, and Smashwords now, and other stores soon.

I now have eight Defender stories completed. The first two are out. You can read the first chapters of both at Wattpad. I still plan to release a new Defender book every other month for the next year.

I hope you enjoy this tale!
Posted by Robert Collins at Monday, July 14, 2014 No comments: 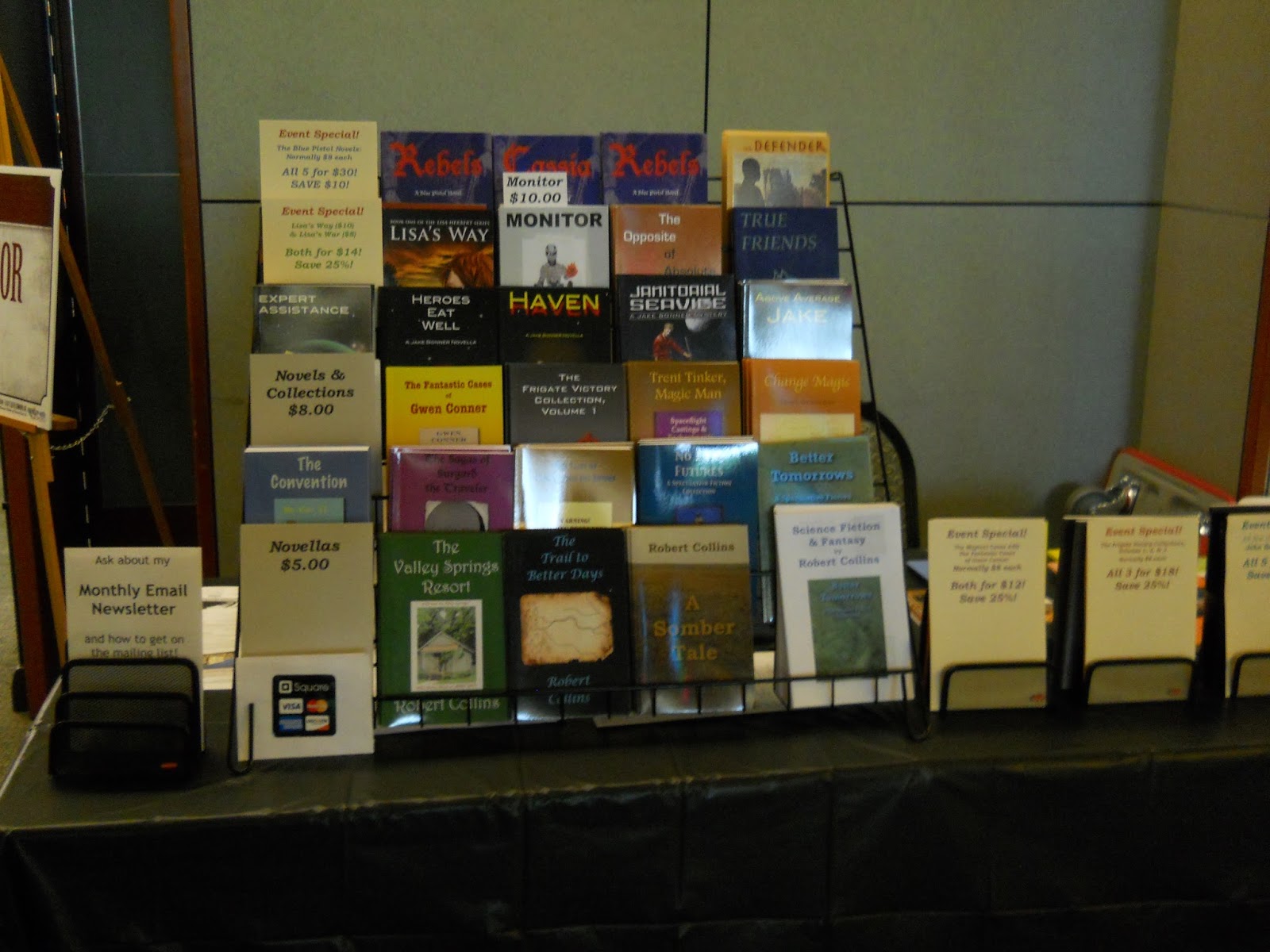 Over the weekend of June 27-29 I attended SoonerCon 23 in Oklahoma City.

Like the past two years, I had a table in the artist alley. This time around I was in a bit of an odd location. I was next to one of the doors to the dealer room. Across from me, a local Star Trek group had brought part of their replica of the original series bridge, namely the Captain's chair and the navigation & helm console. They were allowing people to get their picture taken on their little "set." It was a bit of a distraction for my books, but I was fun to sit across and watch the expressions when attendees saw it and "performed" on it.

As to my book sales, I sold the exact same number of books I did last year, 20. I gave out about two dozen copies of my new flyer, and added several addresses to my email mailing list. I met a few authors, aspiring and otherwise, and was able to talk up Wattpad to them. All in all it was a good con for me.

A couple of other things happened there. One of the guests was voice actress Tiffany Grant. She was a guest at the first Chronicles con in Wichita several years ago. She took part in a writing panel I did with Todd Hunter. I got to see her Sunday at SoonerCon. She vaguely remembered who I was, and we chatted for a bit.

The other thing that happened was that a few people were going around doing video interviews. I took part in all but one of them. You might see me around YouTube and such in the coming weeks. I may mention those on my social media sites if I get links.

No driving diversions on the way home on this trip. I had too much to do when I got back, including write this post.

Here's the sixth "writing stats" post of the year, letting you know how my writing output is progressing.

June started slow, as I still had a home-care nurse coming here every morning. The last visit was during the second week of the month. That allowed me to get back to two writing sessions Monday through Friday. I did lose one Saturday to a signing in Emporia, and the last few days of the month to Soonercon (a post on that will be coming soon).

So, I managed to write 106 pages in June. That's way down from what I could have done, sticking to averages, which would have been over 180 pages. But considering that's a huge increase from May, I'll take it.

I suppose I am making progress to where I need to be. Here's hoping that the pace continues to increase in July!
Posted by Robert Collins at Tuesday, July 01, 2014 No comments: