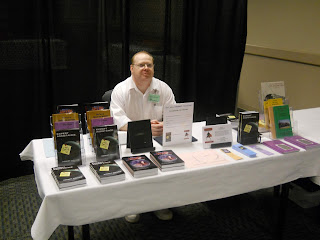 Memorial Day weekend I returned to ConQuest in Kansas City for the first time in a few years. This time around I wasn't a guest but a vendor, selling my books.

Over the first two days of the con I only sold 3 books. Then on Sunday sales jumped; I sold 10 that day for a total of 13. Just as strange is that most of the books I sold were my nonfiction books rather than my SF/F.

Attendance seemed low. I don't know if that was just the case in the dealers room or if it was low overall. I had a good time all the same. I saw people I hadn't seen in a long time and met some new people. I was able to visit the Dawn Patrol room party for a bit, and hang out at Room-Con for about an hour. I got to show quite a few people the book trailer for Expert Assistance; it earned grins and giggles, so that felt good.

My main regret was that I didn't have much extra spending cash. What I brought just covered parking and food. There were some authors whose books I would have liked to have bought. Next year, assuming ConQuest 43 is in the same hotel, I'll try to save up more so I can spend more.

I'll conclude with an event addition: I'll be going to OSFest July 22-24 in Omaha. I plan to be at the author co-op table in the dealers room; I might also take part in some panels. I'll try to update things as information gets to me.

Next week will be another book review. See you then!
Posted by Robert Collins at Tuesday, May 31, 2011 2 comments:

Book Review - Rowan of the Wood

This week's review is of Rowan of the Wood by Christine and Ethan Rose. This was another of the books I picked up at the Oklahoma Steampunk Expo.
The story starts off with Cullen, a put-upon 12-year-old who's an avid fantasy reader living in present-day northern California. Things shift to post-Roman Britain and Rowan, a druid who escapes an attack by raiders by disappearing into a wooden wand. Also along is Rowan's bride-to-be Fiana, two girls who are Cullen's only friends, and a teacher he has a crush on.
The plot takes off when Cullen finds the wand and begins to communicate with Rowan. At times Rowan even takes over Cullen's body. Rowan wants to find Fiana. She has been searching for him, but she becomes more desperate and dark as time passes. The ending makes this book the first in a series.
I found the characters pretty well-drawn. What was very interesting was Fiana; she doesn't start out bad, but we see her fall as time and frustration take its toll.
On the other hand, there's some switching of viewpoints within scenes. This can be confusing and undermines the narrative flow. To some degree events are set in motion in the present due to coincidence. I suppose this can be attributed to magic, but it's still a bit odd.
I am curious to see how the series progresses. I'm giving this book 3 stars out of 5 at Goodreads.
Posted by Robert Collins at Monday, May 23, 2011 No comments: 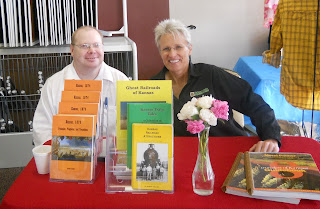 On Saturday the 14th I had a signing at The Bookshelf in McPherson with Marci Penner. As you can see from the picture, I had a few more books to plug. We met some nice people and had a good time, despite her sniffles and my klutziness. I was there to promote my Kansas 1874 book; oddly enough, I sold only one copy of that at the signing, but sold three copies of Ghost Railroads of Kansas.

My next event will be ConQuest 42 over Memorial Day weekend in Kansas City. After that I'll be part of the 5th Annual Author Extravaganza at Town Crier Bookstore in Emporia on June 18; the event runs from 11 AM to 1 PM. This year they're limiting the number of authors to 50 (!). There's already a pretty good list of confirmed authors. Keep checking their website as more choose to come.

Next week I'll be posting another review of a book I picked up at OSE in April.
Posted by Robert Collins at Monday, May 16, 2011 No comments:

This week's review is of The Pirate Bride by father-and-daughter authors Ryan and Anna McKinley. This was one of the books I picked up at the Oklahoma Steampunk Expo.
This short novel features 13-year-old Rachel. She gets a brief respite from her wild younger brothers while on a vacation in the Caribbean by taking surfing lessons. Towards the end of the day she gets to surf by herself. A mysterious school of fish swim by, and strange wave comes up.
Rachel finds herself in the middle of the ocean. She's picked up by a pirate ship. The crew isn't sure if she's a mermaid (a "pirate bride") come to save them, or a witch who will keep them forever lost. Rachel has to get on the pirates' good side and figure out how to escape her odd predicament.
The Pirate Bride is aimed at middle-school and early teen readers, yet I found it fairly enjoyable. Rachel is a character who is sympathetic but not at all perfect. You see her learn and grow as the story zips along. The book also has some good illustrations. Parents could buy this for their children, and still have a good read themselves. I'm giving 4 out of 5 stars at Goodreads.
Posted by Robert Collins at Monday, May 09, 2011 No comments:

This series of book reviews starts with the latest in Lisa Shearin's "Raine Benares" books, Con & Conjure. The heroine, Raine, is still bonded to the soul-stealing rock known as the Saghred. She's trying to run an elaborate con to prevent the elves and goblins from going to war. In the novel we meet a new member of her family of pirates and the assassin who was Raine's ex-fiance'.

The story moves along at a pretty good clip. There's intrigue and action, and the love between Raine and the elf paladin Michael develops nicely. Raine is still a fun character to follow.

However. There are two coincidences that come late in the novel. One involves a murder, the other is a bar fight. Both are used to get Raine to the next place she needs to be. The problem is that both events so rely on coincidence that they undermine the plot.

It would have been far better for Raine to get to where she needed to be of her own volition. This would have made her stronger and more decisive. This is especially true regarding the bar fight. The reveal is so coincidental that I was stunned it was there. It was simply not believable.

For me those two incidents removed some of the enjoyment I had reading Con & Conjure. Since the story is supposed to conclude with the sixth novel, I will pick up that and see how it all turns out. Unfortunately I have to say that this is the weakest book in the series. I give it 3 stars out of 5 at Goodreads.
Posted by Robert Collins at Monday, May 02, 2011 1 comment: