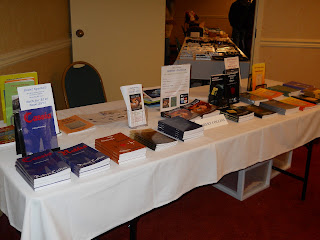 Over the weekend of April 19-21 I returned to Lincoln, Nebraska to attend ConStellation 4.

I did great. I sold almost three dozen books! Last year I sold 17 books, so I doubled my business. I sold books to people I'd met last year, and to new people. I also handed out all 25 copies of the book brochure I brought with me. I hope everyone who bought a book enjoys it.

Sadly, that was all I did at the con. I missed opening ceremonies so I could have dinner. There were a few panels that I might have attended, but they were held during peak attendance times at the con. I'm reluctant to leave my table at such times, unless I'm actually on a panel. I was able to get to closing ceremonies, so I did do something other than sell books.

Still, I had fun. I was able to see and chat with people I hadn't seen in months, or in a year. That's one of the interesting things about going to cons. You're hanging with people you share interests in. Even if you don't see those people very often, you have a connection with them. You stay connected, even if a long time has passed since you saw them last.

The trip to and from Lincoln was good as well. On the way up I visited a library with the new nonfiction book, and on the way back did the same at a bookstore. It's possible one or both of those visits will lead to book talks.

As far as my schedule goes, I have two book signings coming up the next two weekends. I'm off for a few weeks, then on to ConQuest 44. The next post here will probably be after those two signings. Till then, take care & happy reading!
Posted by Robert Collins at Wednesday, April 24, 2013 2 comments:

On the way to El Dorado I realized that I had attended my first annual meeting back in 1993 or 1994, when an article of mine took second place in the essay contest the Society used to hold. I'd attended annual meetings off and on during the 1990s, and more frequently the following decade. Since this book is the last nonfiction book I'll be writing for a long while, the 9th could be the last time I attend a BCHS annual meeting. Another end of an era.

The second talk was at the Rose Hill Public Library on April 13. A small crowd came out to hear me speak. Since they weren't as familiar with the fight in Butler County as elsewhere, I went into the fight in our county in more detail. There were questions about other fights around the state, why we have so many counties, and what might happen in the future.

You'll notice from the photo that the library is next to the railroad line that runs through Rose Hill. While I was chatting after the talk a few trains came through, but during the "official" time of my talk, I was not interrupted.

I might go back to Rose Hill one more time. It seems people still want to hear from me about Kansas railroad history.

Coming up is ConStellation in Lincoln. I'm looking forward to getting back there! I'll let you know what happens when I get back.
Posted by Robert Collins at Sunday, April 14, 2013 1 comment:

The Magical Cases of Gwen Conner

I have a new collection of Gwen Conner fantasy/mystery stories out. It's called The Magical Cases of Gwen Conner, and here's what it's about:


Gwen Conner solves mysteries in a land where magic is used to create telephones, dictation machines, and streetcars. In this collection she has to deal with sleazy journalists, corrupt politicians, and a scheme to rob a payroll delivery. These new stories include:

The Plum Grove Robbery Case: Gwen is asked by the younger sister of a man accused of train robbery to help her brother. The sister insists her brother would never rob a train. Gwen learns that the take from the robbery was small, and passengers on the train weren’t questioned by police. What will be revealed when Gwen untangles the loose threads of this mystery?

Dangerous Dream: A man comes to Gwen desperate for help. He’s had a dream of his hands covered in blood, standing over the body of a young woman. He doesn’t know if he killed her, or if his vivid dream was real. Gwen has to dig into deep into the manufacturing world to determine what really happened.


Here's where you can get it:
Amazon
Smashwords
Barnes & Noble