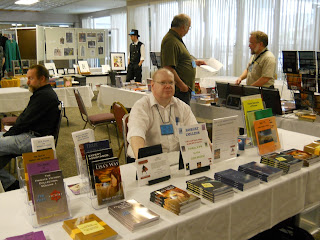 The weekend of April 13-15 I was up in Lincoln, Nebraska, for ConStellation 3. This was my first con of 2012, my first time at ConStellation, and the first time I had been to Lincoln in something like 4 decades.

I had a great time at the con. I met GOH Elizabeth Bear; she signed my copy of Chicks Dig Time Lords. I also met another Kansas SF author, Bryan Thomas Schmidt. I was able to talk about writing to a few people. I sold something like 15 books.

The con staff was great. They had good food in the con suite, and brought the vendors dinner Friday (I passed) and lunch Saturday (great sandwich). They had volunteers manning tables when us vendors had to step away. Let me give out one last "Thank You" to the staff for being so kind.

There was a little excitement late Saturday night: for a short time Lincoln was under a tornado warning around midnight. I had to get up and go down to the basement, where I heard a small bit of the ongoing panel about nightmare con experiences (I kid you not!).

The only downside was the hotel. The vent system was either heat or AC. I spent two cold nights in my room. The wifi was down when I arrived Friday afternoon. The con staff was able to get it working Saturday around noon. The restaurant in the hotel was short staffed, but their food was good. It wasn't the best hotel I've been to, but it could have been worse.

My first con of 2012 was great, and I hope I can go back to ConStellation next year!

Next on my schedule is a signing in El Dorado. I might put up another post between now and then. Keep an eye on my schedule; I should be adding more events for this year.

See you on the road!
Posted by Robert Collins at Tuesday, April 17, 2012 No comments:


I've added images for the short story ebooks that I now have out. The one shown above, "Protection for a New Age," will be going up this week. I've started uploading my Gwen Conner fantasy/mystery stories. I'll be doing that for several months. I've also uploaded two Frigate Victory stories; these will be the last to go up for some time.


In other Victory news, a collection of the stories is now on sale. The ebook edition is already out; I expect the print edition to go on sale this week (around the time my copies arrive). Here's the blurb:


The Frigate Victory Collection, Volume 1: This collection contains 13 Frigate Victory science fiction short stories. The stories are in chronological order, and are together for the first time. Captain Jason Ayers and his crew deal with aliens, politicians, colonists, and pirates. There are action stories, mysteries, and dramas. These tales have appeared in Tales Of The Talisman, Golden Visions, and The Fifth Di..., among others.


This weekend is my first con of the year ConStellation. If you near Lincoln, NE, I hope you'll go, and if you go, I hope you'll stop by my table and say hello.
Posted by Robert Collins at Sunday, April 08, 2012 No comments: 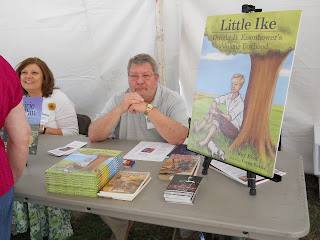 On Saturday, March 31, I took part in the Cow Creek Book Festival. It was put on by the Hutchinson Public Library.

(Pictured is Roy Bird, author of many Kansas books, including a new one on Ike's boyhood in Abilene. Next to him is Beverley Olson Buller, author of children's books about William Allen White and his daughter Mary White.)

I gave a brief talk about how readers can help authors. Aside from buying books, readers can leave reviews at sites like Goodreads, Library Thing, and where they buy books online. Any review, even if it's only mildly positive, is helpful.

Turnout was on the small side, but I was able to sell a handful of books. I talked to a few of the other authors about ebooks and promotion. Overall I had a good time. I hope the festival happens next year, and that I'm invited back.

Coming up in just under two weeks is ConStellation. I'll try to remember to post about my latest short-story ebooks before the con.

Have a good week!
Posted by Robert Collins at Monday, April 02, 2012 No comments: