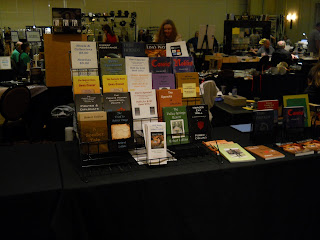 Over Memorial Day weekend I returned to Kansas City to attend ConQuest 44.

I had a table in the dealers room again. This time I brought my new literature rack with me. I was in an odd spot, so I don't know how much the rack helped. I do think it was better having it than not. This time I sold 17 books, 4 more than last year.

I was only on 3 panels this year. The one that was the most noteworthy was the "Classic Doctor Who" panel on Saturday. First, though it was 1 in the afternoon, the room was almost full. Two, the other three panelists and I only had time to answer one question from the audience. What was that question? "Tell me about the Doctors so I can get them straight." It took all 55 minutes to answer that question, and even then we hit the Doctors and some of the companions; touched briefly on the junking of episodes and the 1985-6 hiatus; and didn't get to Paul McGann.

This year I was not on the same floor as RoomCon or any other parties. I was at RoomCon Saturday night for a little while, and chatted with a couple of folks. I then went to the Con Suite and chatted with someone else there for a bit. That was about as much partying as I had the energy for.

As it happened, before the con I sold a Jake Bonner novella. The publisher was there, and he chose one of the artists attending to design the cover. I'll have to get some info to the artist about Jake, and get some files to the publisher. I think this might be the first time I did that sort of business work at a con.

Oh, here's the view I had from my hotel room:

I plan to go back next year.

Coming up on my schedule is the Author Extravaganza at Town Crier. I'm excited to be going back after being away for a year or two.

Talk to you soon!

Filling in the Details

Star Trek: Deep Space 9 did many things to disappoint me. One of them was blowing the chance to fill out the Star Trek universe.

One example of this came in an episode where Captain Sisko's son, Jake, decided to do something nice for his father. Someone came onto the station with a rare baseball card. Jake wanted to get the card to give to his father. Jake's problem was that the Federation doesn't use money. In order to obtain the card, he had to get the card's owner something. That involved going to someone else to get from them what the owner wanted. Over the course of the episode Jake became involved in a series of deals, just to get the card for his father.

Since this episode came late in a season, when tensions were ratcheting up between the heroes and the Dominion, it was criticized at the time as being filler. However, it could have been an important story on its own. The story would have had one of two messages at the end:

One - Jake learns that all those deals are why the Federation has chosen to exist without a monetary system. At some point the Federation came to view money as leading its people to confuse needs and wants. Needs are now taken care of. Wants are harder to obtain, and either require doing what Jake did, helping others, or by being anti-social (stealing, killing, and such). This is why the Federation has no money, and explains more about it.

Two - what Jake went through causes him (and maybe Captain Sisko) to ponder the Federation way. Sure, needs are taken care of, but what about wants? Could Jake have gotten so frustrated that he gave up on his attempt to make his father happy? Could that frustration have instead turned to crime? Is the Federation way truly the best way? Does the system have to be changed, or is this a flaw that people have just chosen to live with, given the alternatives?

Either one of those two messages would have filled in a major detail about the Trek universe. Either one gives the audience a reason to think about how that universe it set up. Is the future portrayed in Star Trek one to strive for, or is there a flaw we need to be aware of as we create our own future?

There are times in fiction where the details can make a difference in a work. I try to keep this in mind when I create my own universes. I'm not always good at filling in the details, but I make the effort whenever I can. I don't want to make the mistakes that I find in other creator's works.
Posted by Robert Collins at Monday, May 20, 2013 No comments:

I put out a few short stories featuring Jake Bonner, one of the heroes of Expert Assistance, earlier this year. Those stories are (latest to earliest):

Above Average Jake: Jake Bonner is approached by a senior executive at Interstellar Minerals. The planet of Monument is mineral-rich and lawless. The lack of authority is endangering IM crews picking up ore, and seems to have allowed some sort of smuggling operation to take root. Jake is asked to go to Monument and clean up the town. Will his wits and his cool ship be enough to keep him alive as the planet’s only lawman?

Seeking Trouble: Jake Bonner heads to Breton system to look for work to keep busy. He’s intercepted by the local law and meets a woman named Nina. She claims to be a telepath, helping the local authorities find criminals. She tells Jake she wants to get away from her boss. Jake also meets a girl named Ella who tells him that the authorities are paying more attention to travelers than their own people. Can Jake sort out who’s telling the truth? Will he ever get a moment’s peace?

Criminal Masterminds: Jake Bonner is hired by a professor to help him survey a solar system. The professor isn’t worried that he doesn’t know who hired him to conduct the survey. Jake’s ship is fired on, the professor turns up missing, and Jake tangles with criminals and corporate drones. Another job, another series of annoyances to be resolved.

All of these short stories sell for 99¢. You can find them where ebooks are sold. Another novella featuring Jake should be out this summer!
Posted by Robert Collins at Monday, May 13, 2013 No comments: 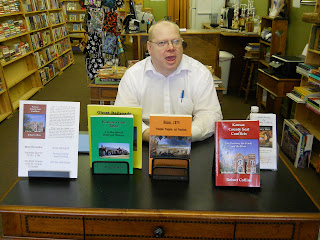 On Saturday, April 27, I had a book signing for Kansas County Seat Conflicts at The Book Grinder in El Dorado, Kansas. It was quiet as signings go. I sold a few books, and did some editing on an upcoming Blue Pistol novel. As it happened, I didn't sell any copies of the book I was there to promote, but I did sell copies of two of my railroad history titles. 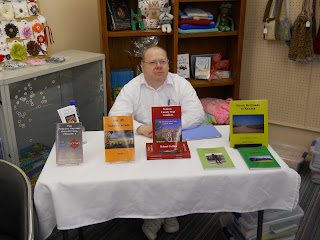 Then on Saturday, May 4, I went down to Slate Creek Books in Wellington to do another signing for Kansas County Seat Conflicts. It was also quiet. This time around I did sell a copy of the book I was there to promote, along with two of my railroad books. I also did some editing, and chatted with the owners about this and that.

The next event on my schedule is ConQuest. Between now and then I'm going to put up a post about some new short story ebooks I've published. Take care!
Posted by Robert Collins at Sunday, May 05, 2013 No comments: