This week's book review is Chicks Dig Time Lords. It's a collection of essays by women who are fans of Doctor Who. I picked up my copy at ConQuest 42.

There's a wide variety of essays in this collection. Some are about the contributor's life in Who fandom. Some feature critical analysis. There are pieces from women who have written Who novels. There are also interviews with India Fisher and Sophie Aldred.

I've wanted to get a copy since the book first came out. One of the contributors is a good friend of mine, Jennifer Adams Kelley. I got the book in trade from another contributor, Torchwood Babiez co-creator Tammy Garrison.

This book is a very interesting read. It does tell of Who fandom from a female perspective. It also reveals the diversity of how fans have come to the series. There are those who came during the original run in Britain; those Americans who came when the series arrived here in the 1980s; and those who joined up when the series restarted several years ago. It's important to note that fandom isn't just a "guy thing" (or a "boy thing"), but that it crosses lines of gender and generation.

Another aspect of the book I liked is the "warts and all" approach of some of the essays. There are criticisms of the series and of how fandom sometimes operates. This is in contrast to what I read about Star Trek fandom in the late 1970s-early 1980s, which portrayed fandom as one big happy family. It's good to let fans know that not everyone gets along, if for no other reason than to show how fans shouldn't behave.

If you are any sort of Who fan you need to pick up this book. I give it 4 out of 5 stars at Goodreads.
Posted by Robert Collins at Monday, June 27, 2011 No comments: 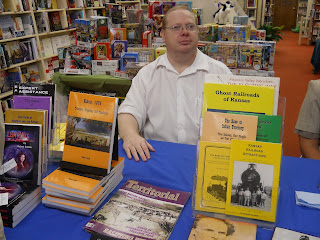 Saturday the 18th was the 5th Annual Author Extravaganza at the Town Crier Bookstore in Emporia. About 40 authors were there this time.

I was there to promote my Kansas, 1874 book. Two copies of that book did sell. A couple of railroad books were also sold, but it seems everywhere I go at least one moves. What was surprising was that two copies of Fun Tales of Fantasy and the Future and a copy of Expert Assistance also went out the door.

Something else interesting was that there were a couple more SF/F authors there than last year. Could it be that the number of genre authors in Kansas is growing? Overall it was a fun two hours. I wish I could have picked up some books, but I'm having to save my pennies for OSFest in Omaha in July. I also would have liked to have talked to more of the authors.

An author from Abilene is working to put on an Author Roundup there on October 29. I've put in for a table at the event. I'll let you know more as I know more about it. Right now I can say that it's October 29, at the Abilene Community Center, from 1-4 PM.

Next week I'll post another book review.
Posted by Robert Collins at Monday, June 20, 2011 No comments:

Book Review - From Ice to Ashes

I picked up this book at the Sunflower State Book Festival last October. The author, Maia Carlson, sat in front of me. At the time she was a high school senior who had self-published several SF/F novels.

From Ice to Ashes tells the story of a young woman, Glace, who seeks revenge on the warlord who had murdered her family. Fleeing from a failed assassination attempt, Glace meets up with a magic user named Ianira. Ianira creates a living weapon for Glace to use against the warlord. Things become complicated when Glace begins to see the living weapon as a living being and becomes his friend.

The ideas behind this novel are very unusual. The whole idea of a "living weapon" is fascinating. The characters are strong, not always sympathetic, but compelling.

What makes this book hard to read is that Carlson often switches the point of view from one character to another within scenes. It's jarring and takes you out of the story. Fortunately there are only a few viewpoint characters, so the problem is manageable.

I hope that this young author learns, grows, and continues to release books. I give From Ice to Ashes 3 out of 5 stars. The book is available at Lulu.com.
Posted by Robert Collins at Monday, June 13, 2011 No comments:

This is another of the books I picked up at the Oklahoma Steampunk Expo. I was with the author in the Artists Alley during OSE.

CV: Moon is an alternate history tale in the spirit of the science fiction of 100 years ago. A young man from Ohio, Curtis Matricks, is enlisted by the wealthy British businessman Mason Star to join the crew of his new spaceship. On New Year's Day 1901, the "Star's Comet" embarks on its maiden voyage to the Moon. Matricks narrates the tale of his adventure, which includes meeting a sentience race of insects living deep below the Moon's surface.

Taking the whole novel as alternate history allows for some interesting reading, not the least of which are the aliens on the Moon. Star's teenage daughter Mary is a bit of a feminist (and fairly smart). The technology includes solar power, cars, and a massive tower through the atmosphere. Star's crew is multicultural rather than just British, Anglo-American, or European.

It's a pleasant read and the first in a series. I'll need some time to consider whether or not I want to invest in the other books, but I'm leaning towards doing so. I give the novel 3 out of 5 stars at Goodreads.
Posted by Robert Collins at Monday, June 06, 2011 No comments:

Over May I held a giveaway at Goodreads for Expert Assistance. I wanted to let you know how it went. Almost 650 people entered the giveaway, and over 50 marked the novel as "to read."

I mailed out the two winners' copies yesterday morning. I don't know if I can announce them; if you're on Goodreads, see this, and want to announce yourself, go right ahead. Thanks to everyone who took part. To those of you that didn't win a copy, if you still think you might like the book please consider a purchase. I plan to do this again when the new edition of Lisa's Way comes out.