So, in last week's post about cord-cutting, I mentioned that I'm still an avid podcast listener. I also said that I'd changed my podcast app from Apple's to Overcast. I promised to list what I was listening to, so here's the list.

RFS is long-running and covers a lot of ground in Who; Verity is female-centric, and does lots of fun episodes; TTV is Kansas-based and covers books & audio along with the TV series; and Lazy Doctor Who is Steven from RFS and Erika from Verity watching DW from the beginning (when they get around to it, hence the title).

I'm not as much into history as I used to be, but I still listen to two history podcasts. HH is in depth on specific events/periods, while HC features women in history.

If you're following me on social media, every two weeks I mention I'm rewatching an episode of Babylon 5; this is why. S&L is a book club podcast that's another long-runner. The Incomparable covers all sorts of geeky topics. Lazy Doctor Who is part of their network, and I sometimes listen to other shows on the network if an episode interests me.

Speaking of, Steven & Erika (Lazy Doctor Who) are doing a re-watch of The Prisoner for its 50th anniversary. Their podcast covering the re-watch, In the Village, will only last as long as the series did (17 episodes).

Cordkillers is about cable cord-cutting and streaming services, among other things, so naturally I'm watching. VF is a book club centered on genre romance with women as leading characters, and is loads of fun. Among the hosts of VF are Felicia Day and Veronica Belmont (S&L). Cordkillers is weekly, while VF is monthly. I watch both of these on YouTube; follow the link to see what other channels I'm following.

Download is the only tech podcast I'm listening to. SG is a local podcast. THLPodcast is run by the owner of the THL site, and has his brief thoughts on the tiny house movement.

So, that's what I'm listening to these days. I've dropped a few that I'd been listening to, some for a long time, some just for a short time. The list tends to change as subjects interest me or don't, or as podcasts come and go. If this list changes much down the road, I might revisit this subject and post a new list.

I hope you enjoy following along on my cord-cutting journey. That's all for now, but as I said, if things change, I'll put up a new post.
Posted by Robert Collins at Monday, October 16, 2017 No comments: 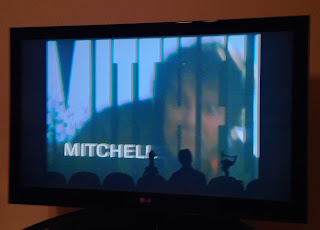 I thought this would be a good time to update how I'm moving towards a future where I wouldn't need to have cable TV. If you want to read my others posts on the subject, click here, here, and here.

As I wrote in those past posts, I'm more of a music person than a TV person. I've had Apple Music for a couple of years now, and I like using it. I've almost moved away from buying any music at all. Instead I just add tracks and albums to playlists, and if the rights expire and they disappear, either it's no big deal and I get something else, or it's tracks I bought and just download them so they'll upload.

TV has also narrowed for me. The only series I'm still following is Doctor Who. I'm not following any tiny house shows anymore. What I wanted to see in these shows was the completed build of the tiny house in the episode. I can see those sorts of tours on the tiny house channels I follow on YouTube. To get DW, I'm considering buying season passes on iTunes. I wouldn't see episodes exactly when they go out, but I would see them without commercials. I can download episodes if I want to keep them.

That does mean I'm not watching any genre TV. That might seem strange, considering how much genre TV is on these days. For me, most of these series seem way too on the dark side for my tastes. Others seem like variations of shows I've already seen. I am looking out for new things to watch. Maybe someday I'll find that new thing, and let you know about it in a future post. For now, for me, the screen is largely off.

I'm still listening to podcasts. I have, however, moved from Apple's podcast app to Overcast. It's just a better app for listening and managing podcasts. I'll mention what I'm listening to in the next post.

Oh, the Apple TV lasted about 3 years. I thought about getting a new one, but I passed because of cost. I bought a new iPhone in December, and I like using it to watch video content.

Here's something else that happened this year on this topic. When the new season/series of Mystery Science Theater 3000 came out, I subscribed to Netflix. I got one free month, paid for one month to "thank" them for MST3K, and cancelled. I subscribed to BritBox for classic Who; watched the First and Second Doctor stories I wanted to, and canceled. I may resubscribe to BritBox when they get the reconstructions of the missing episodes, but I can wait.

That's the cool thing about cord-cutting. It's easy to subscribe to these streaming video services when they have content you want, and easy to cancel when you want and for whatever reason you want.

Next time: what podcasts are filling my ear-holes!
Posted by Robert Collins at Monday, October 09, 2017 No comments: 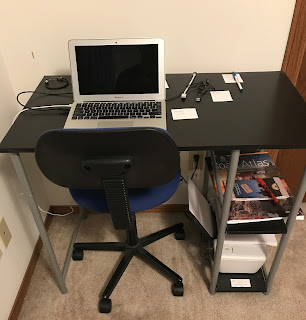 Here's the latest post about how much I've been writing this year.

So, September. I started by finishing up the novel I'd been working on the past few months. I paused for a couple of days because I had an idea of consolidating my series into single print books. But those were going to be unwieldy monsters. I gave up that idea, and lost a couple days. I started on another project the second week of the month, but errands and my regular check-up disrupted the week. I also felt my motivation on the project was lacking, so that week was lost. I went to another project, and have been writing quite a bit since.

All that means I wrote 131 pages in September. Overall not too bad, but still about 50-60 pages below what I could have done. It's still a better number than I thought it would be.

October is probably going to be off by some degree as well. I have a local convention I'll be doing, and that's going to take me away from a few days of writing at least. Still, the project I'm working on seems to be flowing right now. Maybe it'll be a good month. Here's hoping!
Posted by Robert Collins at Tuesday, October 03, 2017 No comments: