Ending A Series or Two

In the last year, I've written what I believe to be the last stories in three of my universes. Last year I wrote the last books in the "Jake Bonner universe" and the "Blue Pistol" series. Then, in the third week of February, I finished the first draft of what I think is the last "Frigate Victory" tale, a novel, to be precise.

What feels strange about all those ending works is how long I've been living with those characters. The ancestor of the first Jake Bonner tale, Expert Assistance, was a film script that I wrote in the late 1980s. The first Frigate Victory story was also a script. I believe the first short story was written in the  mid-1990s, because my records show the first short story published, "Positive Spin," came out in 1997.

Then there's the Blue Pistol series. I know the original short story, first called "Stupid Girl," was written in the mid-to-late 1990s, even though the story wasn't published until 2003. I went through at least three drafts of the first novel, Cassia. I even wrote several more short stories; all but maybe one ended up in that first novel.

In the case of the Jake Bonner and Frigate Victory universes, it feels as though I've taken the main characters as far as I can. They haven't exactly gone from zero to hero, but they have progressed farther on and up in their lives as I feel is as possible for them. In both cases, I'm not sure I can take the characters any farther without getting them into some absurdly high-powered adventures.

The Blue Pistol series feels a bit different. I know there's more that the main characters can do to achieve their overall goal. However, it also feels (without giving you any spoilers) that any more direct action would be too easy. There are new characters that could step forward, but I'm not sure, right now, that their adventures would make for interesting stories.

I also know that coming to the end of these roads isn't the end of me. I have a new series, the first volume of which should be out later this year. I have another work that I now see is the first of something. Whether it's the first story in an open-ended series, or the first part of a long single work, I'm not sure. I'll need to do some thinking about that universe and what I want to do with it.

I don't know about other authors, but I have mixed feelings about coming to the end of these roads. It makes me a little sad to think that all the time I've spent telling these stories has come to a conclusion. Yet it makes me happy to know that I can bring a series to a close and move on with new characters and their adventures.
Posted by Robert Collins at Friday, February 21, 2014 No comments: 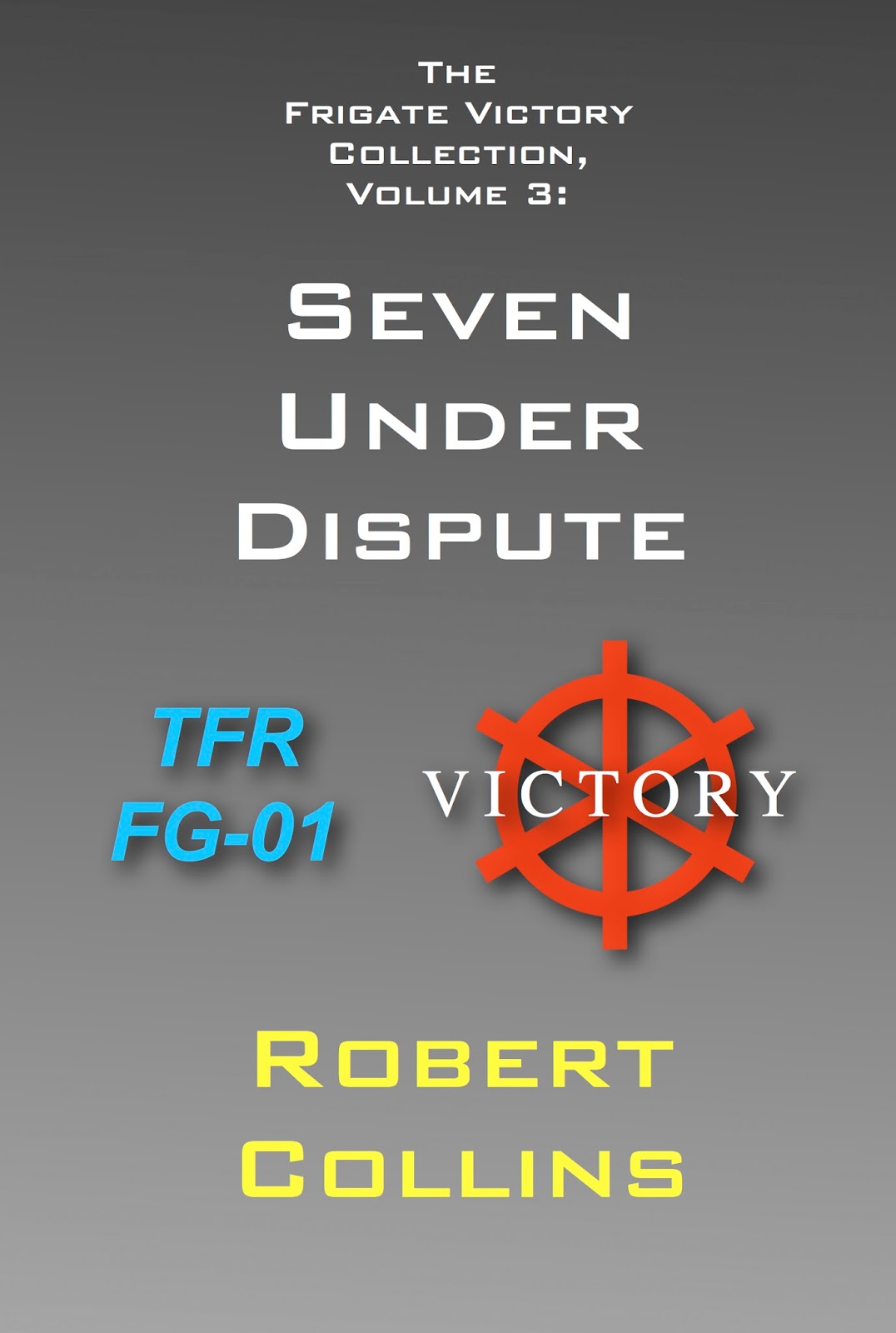 I have a new Frigate Victory collection available, Seven Under Dispute. Here's what it's about:

Ayers’ crew has to deal with new problems, including settling a dispute between two alien races. Both races claim seven planets lying on their border, with one planet settled by both races. The question Ayers and his friends have to answer is this: what’s in the best interests of those living on the “Seven Under Dispute?”

Other stories in this collection tell of the hunt for con artists, a crash investigation, and what the ruins of an ancient machine can tell about a long-dead civilization. If you enjoyed the first two “Frigate Victory” collections, you’ll want to get “Volume 3: Seven Under Dispute.”


The collection is available right now at Amazon, B&N, and Smashwords, in print and ebook editions. It should be elsewhere soon.
Posted by Robert Collins at Friday, February 07, 2014 No comments:

I'd like to start a new series of blog posts for 2014. Inspired by some of the posts I'm seeing from other authors, I thought it might be good to report to all of you on my writing progress each month. If you like these posts, please let me know in the comments or at one of my other sites.

I keep track of my daily progress with a page count. Yes, word counts are the common currency of writing. However, it's easier to write a one- or two-digit number on a calendar than a four-digit number.

One last thing before I get to the stats: my goal is to write at least 4 pages in the morning, six days a week, and at least 2 in the afternoon, six days a week. I'm thinking about modifying those goals in the next month or so. I'll let you know what I decide.

So, for January, I wrote a total of 131 pages. That's about 20-25 pages below what I should have written for the month. However, I did lose a week to suffering a back strain, and there were days where I had to run errands during my scheduled morning session.

All that said, under the old schedule, with just one session a day, six days a week, my output would have averaged about 100 pages a month. So, overall, January was okay, but not as good as it could have been.

(For you writers out there, that means I wrote roughly 33,000 words in January.)

Those are the stats for the first month of 2014. Here's hoping for more productivity the rest of this year.
Posted by Robert Collins at Saturday, February 01, 2014 4 comments: