The Journey of Princess Anna

Another fantasy novel for your consideration: 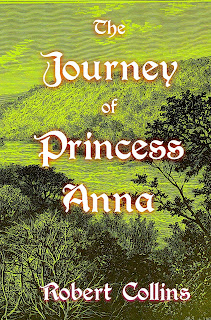 Princess Anna takes an interest in fighting at an early age. She grows up to become a skilled and renowned warrior. But there’s little place in her kingdom for her, seeing as she’s also the youngest of three children.

She chooses to leave her kingdom and explore the surrounding region. She hopes to learn more to benefit her father the King and her brother, the Prince and heir to the throne.

Anna quickly finds war, injustice, and slavery. She refuses to let good folk suffer at the hands of bad rulers. She vows to fight for what is right, even if she must side with outlaws and common villagers. She also finds her affections challenged in a most unexpected way.

The novel is on sale now; check your favorite store to get a copy.
Posted by Robert Collins at Monday, July 13, 2020 No comments:

Half the year is now gone. I’m okay, and I hope all of you are okay as well.

June was an interesting month for me as far as my writing went. I completed a short novel that came in at 43,000 words. I paused for a few days to come up with some story ideas. I went onto the next project, which was supposed to take place in the same world as the novel I’d just finished.

I say “supposed to” because I wrote only few chapters before giving up on the project. I just wasn’t feeling the story. Another feeling I had was that I was treading on ground I’d already been on with other projects. I’m going to hold onto what I did write; I might be able to use some of that in another work. So after a day’s pause I went to another project I’d already had plotted out. By the end of the month I was almost done, and by the time you read this I should be done.

All that means I wrote 248 pages in June. Considering that I didn’t write a handful of days, that’s only about 15 pages off what would have been a normal pace.

I have some projects plotted, but I want to get one more ready before I start on this new world and character I’ve created. The character has been in my head for weeks, so I’m eager to get going. Here’s hoping that her tales flow right out me!
Posted by Robert Collins at Monday, July 06, 2020 No comments: