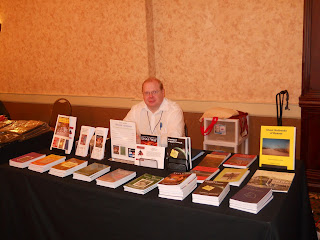 The weekend of October 19-21 I attended Encounters, a new sci-fi con in Wichita. It was a good con for me.

As far as my sales went, this was the best con of 2012. I sold 15 books at Encounters, just over the totals I sold at the other cons earlier in the year. Most were SF/F, but I did sell a handful of nonfiction books too. I handed out a dozen copies of both my ebook brochures (one's for books, the other for short story ebooks). I've got my fingers crossed for more sales in the days to come.

The Whovians of Wichita were there, of course. My table was next to a local dealer who had DW merchandise. If I noticed someone looking at the DW stuff, I tried to point them to the Whovian table when they passed by mine. I was able to sit in (well, just outside) on the first hour of the DW panel Saturday night. Yes, the first hour. I heard it went on for quite a bit longer than that.

Since this was a Wichita con, I saw some familiar faces. Some I hadn't seen in months. There were a few I hadn't seen in several years. It was good to reconnect, even if it was just for a couple of days.

I hope Encounters is here to stay. Wichita needs a good all-genre con. I'll be pulling for them to iron out the bumps, to grow, and to improve. If you were there, I hope you had a good time too.
Posted by Robert Collins at Monday, October 22, 2012 No comments:

Since August I've been making the stories in the Surgard collection available as ebooks, either as singles or pairs of stories. Here's the breakdown:


Surgard and the Plague of Poets

Surgard Goes for the Gold / Surgard and the Cattle Thief


And this month: Surgard's Lousy Celebration (the very first Surgard story that I wrote!). Since the collection has been out for a few years now, I won't recap the plots of the stories. All are on sale where fine ebooks are sold.

For the rest of the year I plan on releasing novellas. I'll let you know more about them as they come out.

Later!
Posted by Robert Collins at Monday, October 15, 2012 No comments:

Event Report - A Talk & a Signing 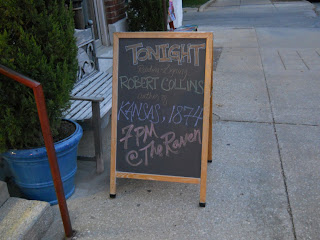 On Thursday, October 4, I had a book talk at the Raven book store in Lawrence. I was there to promote Kansas, 1874. A handful of people came out, so that was good. I ended up talking about my railroad books, Jim Lane, and the state of publishing, along with the 1874 book. Everyone who showed up bought a book, so, yay!

Then on Saturday, October 6, I did a signing at Ad Astra Books in Salina. No one came to see me, but one of the guys working bought a book, and I had a nice chat about books and publishing with the other young man working that day.

I took roundabout roads to get to Lawrence on the 4th and back home on the 5th. On the way up I passed through White City. I had no idea the town had a park named for the Katy railroad. They have an old boxcar that appears to be some sort of museum. It was one of the cool finds on that trip. 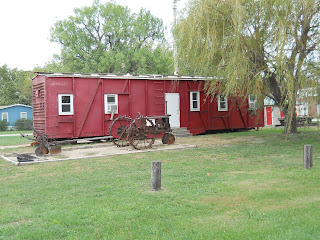 I've got about a week and a half of quiet before the next event. Next week I'll post about the latest short stories to have gone up as ebooks. Until then, take care and happy reading!
Posted by Robert Collins at Monday, October 08, 2012 No comments: 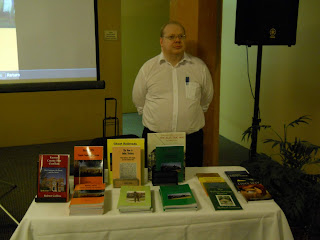 On Thursday, September 27, I gave a talk about Kansas 1874 at the Museum of World Treasures in Wichita. My talk was part of their celebration of a new exhibit about the Wild West.

Only a few people came to hear me speak. The talk was booked only a few weeks before, so I don't know how well the Museum was able to get the word out. There were more Museum staffers there than attendees. Still, the talk went fine, and I sold some books. There's a chance that the Museum might stock some of my nonfiction titles. Last, I was able to look over the new exhibit. It's doesn't take up much space but it's good. If you visit the Museum of World Treasures, give yourself plenty of time to see everything, including their Wild West section.

The next day I hit the road so I could do a book signing at the Rivendell Bookstore in Abilene on Saturday, September 29. Again, only a few people came out, but quite a few books were bought. The store also chose to get copies of my nonfiction books for their own stock. I'll go back there once Kansas County Seat Conflicts is available.

The Abilene trip allowed me to do a little more sightseeing. I hadn't been to the Eisenhower Presidential Library in about 40 years, so on this trip I went. I didn't take a tour of the home, but I did walk through the Museum. I'm glad I was able to visit.

Funny thing about both events: I met SF fans! Some of the Museum staff were fans, as was one of the railroad fans who came to my Rivendell signing (and, well, the store too). I got the chance to talk up Encounters and the Whovians of Wichita. I hope they benefit from those chats.

I have two more signings coming up this week. I'll let you know how those go next week!
Posted by Robert Collins at Monday, October 01, 2012 No comments: