Trent is a young man in search of a path. He’s learned to cast spells, but hasn’t enough coins to start his own shop. One day his father asks him to help light the city’s streets to find a criminal.

That work will start Trent on the journey of a lifetime. He will make discoveries and propose ideas that will change his world forever.

The short stories in this collection take Trent from a minor dukedom to the edge of space. How can you do that with magic? Read and find out...


The collection is on sale now in print and ebook editions at Amazon, Smashwords, and Barnes & Noble. It'll be at other stores soon.

By the way, I've added a link on my SF/F Books page to my new novella, Janitorial Service, which is out through Alban Lane. It's another Jake Bonner tale; I hope you like it.
Posted by Robert Collins at Monday, November 18, 2013 No comments: 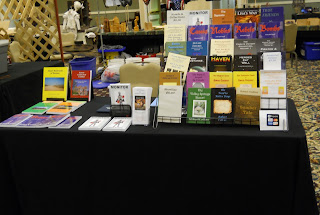 Over the weekend of November 1-3, I attended the Emerald City Steampunk Expo in Wichita. This was its third year; I missed it last year, so this was the second time I'd been here.

As with other cons over the last few years, I bought a table in the dealer room. I sold 29 books this year. That's pretty good for this year. That compares with just 8 books sold back in 2011!

I was looking over the post for the 2011 ECSE; that was the first event that I made up a brochure to hand out to people, whether they bought books or not. I gave out brochures this year with every sale, and I handed out at least a dozen more. I never know if they help get books sold down the road, but it's an inexpensive way to get my name out at cons and other events.

I didn't put in for any panels this time around. The only panel I attended, and that was for a few moments at the start, was one on con horror stories. I had one to share. Nothing terrible happened to me at this con; the story is more "here's the tale of the hotel that this con was held at."

There were familiar faces there, including several I'd just seen at Encounters a few weeks ago. I met some new people as well, which is always fun. I talked up a few other cons to some vendors to give them ideas for places to go for next year. I also talked writing and books. If the con continues I'd be happy to return next year.

As it happens, I don't have any more events scheduled for this year. I plan to be at two cons next year, with more likely. I may also have a signing in Wichita next year. I'll try to do an event wrap-up later in December.

More books will be coming out before the end of the year, and I have two writing posts on deck, so keep coming back!
Posted by Robert Collins at Monday, November 04, 2013 No comments: