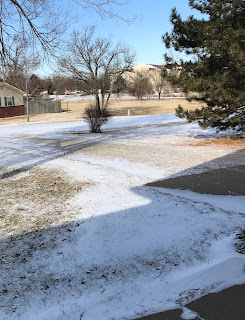 Here’s a picture of the dusting of snow we got from a couple weeks back. I’m using the chance to post this little wintry photo as a reminder that I’ll be restarting my newsletter soon. If you like me & my writing please subscribe. Thanks!
Posted by Robert Collins at Monday, January 20, 2020 No comments: 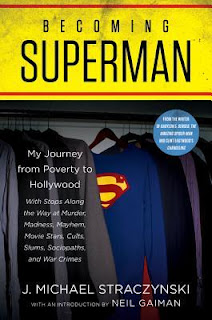 In the first weekend of December I read Becoming Superman, the memoir of J. Michael Straczynski, creator of Babylon 5, Sense8, and quite a bit more.

I wanted to read this book when I first heard about it. I’ve said it before and I’ll say it again: some of the science fiction I write takes inspiration from Babylon 5. I felt I had to know more about the creator of that series. JMS’ memoir was tough going, but I really needed to hear his personal story.

In the book JMS tells of his terrible upbringing of abuse and poverty. He writes about trying to find his way, and not always succeeding, but never giving up on the effort. Some of those efforts led him to become a journalist, a writer for animated TV series, a writer and creator of live-action TV series, a comics writer, a film scriptwriter, and a novelist. Yes, the man has bounced around over his writing career.

The first several chapters are difficult to read. I won’t detail the abuse and hardship here; read the book. Suffice it to say that it was awful.

Yet even there JMS found hope. He discovered the old Superman TV series as a boy. The character of Superman gave him a better example to live by. He could be kind instead of cruel, helpful instead of selfish, honest instead of deceitful, and above all good instead of evil. That discovery in turn led him into the world of science fiction and fantasy. Getting into that world led him to the realization that fiction didn’t just appear, but was created by writers. Writing could be his way out as well as a way to channel his thoughts, feelings, experiences, and beliefs.

This is one of the great values of this memoir. Creating is a method of showing ourselves to the world. We create to be heard and to express who we are. You don’t have to be born creative. You just need the desire to channel yourself into whatever it is you make, be it fiction, art, cosplay, gaming, or anything else.

Later on, as JMS goes through different aspects of his writing career, another theme pops up. Time and again he’s asked to compromise his values or plain common sense to remain where he is. Time and again he refuses, because the compromises often boil down to the notion that the audience is stupid or that egos must be flattered at any cost. I think the lesson is this is if you’re going to put yourself into your creative works, you should show your best self.

This was a powerful read. At points it’s a very hard read. But it’s worth reading, even if you’re not a fan of JMS and his works. There’s hope in creativity, and this memoir drives that point home.

2019 is over, so it’s time to recap December and my year in writing.

I got the last bit of a 45K-word short novel done to start the month. During the month I got a 41K short novel written. Towards the end of the month I finished a work that came in at 27K words (wrote the last thousand or so on New Year’s Day). That means I wrote 277 pages in December. I’m good with that.

Overall in 2019 I wrote a total of 2902 pages. That ends up being an average of 242 pages a month. I did up my writing schedule during the year. I imagine that total will go up in 2020 as I continue to settle into it. As a reminder, I aim for 4 pages a session, 3 sessions a day, Monday through Friday.

What’s that in terms of words? Roughly speaking I wrote 725,000 words in 2019. That’s well over 100K words from 2018. If I can keep to the bare minimum of my schedule this year, I might be able to write three-quarters of a million words. Not quite the million words a year some writers can do, but who knows? I might be able to get there sometime in the future.

So, what will I be writing? As this post is published I plan to start on the fourth of a quartet of fantasy-romance stories I’ve been writing. After that I have some short stories to pursue. After those I believe I have some outlines that I’m hoping will lead to novel-length works.

How will I do? Keep following my blog this year to find out how much I write. There’s also going to be lots of releases this year, too. Please consider subscribing to my newsletter to keep updated.

Here’s hoping for a productive and creative 2020!
Posted by Robert Collins at Monday, January 06, 2020 No comments: