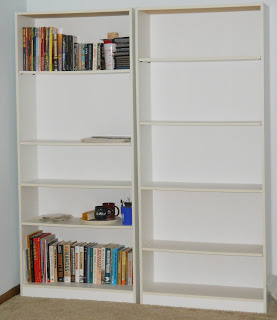 Over the past several months I've been getting rid of books, DVDs, and other "excess baggage."

I took a look at all the "stuff" I had at the start of the process. I found that I'd accumulated a lot of things that I had only looked at once. Some were books that I had bought for one of my nonfiction projects. Some were movies that were replacements for ones I had lost in the Andover tornado way back in 1991. There were also a couple of shelves of contributor's copies of magazines I had sold short stories or articles to.

Deciding to get rid of the books and DVDs was pretty easy. If I wasn't going to keep looking at something, it had to go. It's easy to acquire things that you're partially passionate about. But if those things don't mean a great deal to you, what reason to you have for keeping them? My answer was "no reason," so out they went.

The decision about the magazines followed another line of reasoning. Many of them hadn't aged well over the years. I don't mean that they yellowed or had faded. I mean that they just didn't look very nice. Some had hand-drawn covers; some were stapled in one corner; many were laid out the old "cut and paste" way. Even some of those that did look okay still didn't move me to keep them. I chose to keep about a dozen that I felt were important to me, and threw out the rest.

I think I used to be a little bit of a pack-rat. I see now that it isn't important to keep everything associated with your life and projects. Memories will do fine most of the time. It's better to devote space to what's really important to own.

I have two cons on back-to-back weekends (!), so I won't be posting here until they're over. So, stay cool and keep in touch!
Posted by Robert Collins at Friday, July 20, 2012 No comments:

This month I have two new short ebooks for sale. One of them is the first novella I've put up for sale. It's called The Valley Springs Resort, and here's what it's about:


The Valley Springs Resort is a place on a distant world where visitors can relax and have a good time. You might not think such a place has much of a story. You’d be wrong, which is why you need to go there. From its founding by a lovable eccentric to its sad-yet-funny end, this novella tells the tale of the Valley Springs Resort.


(Boring parts left out to further your enjoyment.)


(Sordid bits left out at our attorney’s insistence.)


HAVE A NICE STAY!

This is 99¢, just like the others, and you can find it where you buy ebooks. At Smashwords, it will be FREE until the end of July, as are all my short story ebooks!

I have a new short story collection out, Better Tomorrows. It contains several of my more upbeat science fiction & fantasy stories. The stories have appeared as 99¢ ebooks over the last year. The collection is in print and ebook editions. Among the stories included are:

Protection for a New Age:  Four friends search for an artifact from a mythical time when magic was supposed to be real.  Could those myths be true?

The Choice:  A young starship officer is assigned to make contact with an outdated generation ship. While on the generation ship, a father asks the officer to find his daughter.  What effect could that simple task have?

What To Change: Doug Patterson gets the chance to go back in time to alter his life.  Will he be able to change his life for the better?

Stories: Daniel & Tamara were supposed to be part of humanity’s effort to settle space. Instead they go forward in time, passing along news and entertaining colonists.  When they come to a colony that’s taking a dark turn, will their skills help?

And here's where you can get them: