I was in Kansas City the weekend of March 13-15 to attend Planet Comicon. This was my first time at this con, and it's by far the biggest event I've ever had a table at.

I arrived on Thursday the 12th to set up. My space was in the Artist Alley, close to the entrance. Because I was staying at a hotel some distance from the convention center, I took the hotel shuttle up Friday and Saturday. As a result I arrived at the venue later than I normally want to arrive at a con dealer's room. I'm going to see about changing that the next time I attend.

As far as sales went, I was able to move 30 books. That's good, but less than what I was hoping for, consider that PCC is much larger than the cons I usually do. It's true that this is more a media con than a literary con. Also, it was my first time there; it's huge; and, from what I heard, there haven't been that many authors there in the past. Still, 30 books is nothing to sneeze at, so I do plan to go back next year.

Because PCC is so big, it was hard for me to see much of everything. I spent most of my time at my table, with essential runs for food, water, and bathroom breaks. There were only a handful of booths and people I wanted to see that I did get to see. I don't know what I'll be able to do about that in the future, but I'll give it some thought.

If you weren't there, you're probably wondering how big PCC was. The hall was spread over a couple of city blocks. Yes, you read that right; between 13th and 15th Streets, if my memory is correct. I did a great deal of walking around over the weekend, even if I didn't get to see close to everything. It was probably the most walking I've done in years.

Overall, I had a good time. I'm hoping that the sales and connections I made will result in more sales throughout the year. I plan to apply for an Artist Alley space for next year.

I took a long route home, and was able to adda few more highways to those I've driven this decade. One length is US-169 from Olathe to Paola; the other was US-59 from Garnett to Parsons. There was one other auto milestone crossed on this trip: the mileage on my car is now past 100,000 miles!

My schedule is going to be quiet for the next month and a half, then I'm going to have a busy May and June, with four cons in two months. Keep an eye on my Events Page for where I'll be, and any updates to my schedule.
Posted by Robert Collins at Monday, March 23, 2015 No comments: 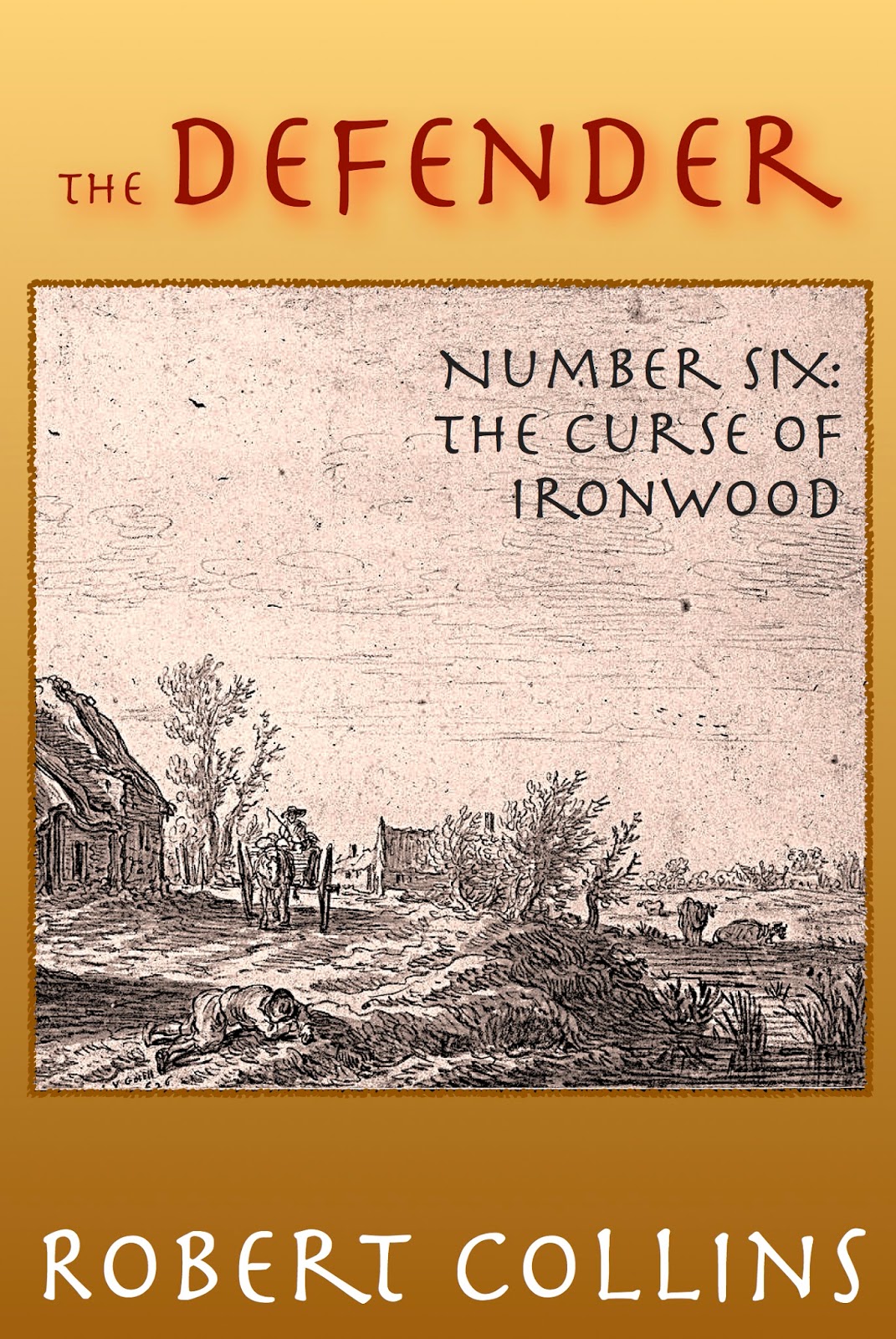 The sixth Defender tale, The Curse of Ironwood, is now available; here's what it's about:

Allan and Nancy want to find more ancient magical artifacts, as part of their roles as “The Defender” and “The Moon Spirit.”

The trail leads them to the dukedoms of Stonebridge and Ironwood, which are suffering under a few years of poor harvests. Allan’s knowledge of magic leads him to discover dark magic at work in the ground around Ironwood.

Can Allan and Nancy uncover the truth about this dark magic? What will they learn about the history of their land as they search for the source of Ironwood’s “cursed” soil?

The ebook is on sale at the usual stores; please check the Defender page for links. The price for the ebook is $2.99, and I've lowered the price of the other titles to $2.99 as well.

Con season is just about to start for me so, yes, you can buy the ebook from me if you see me, along with all my other ebook and print works.
Posted by Robert Collins at Monday, March 09, 2015 No comments:

Here's the second post of the year about how much I'm writing.

February has been a remarkably steady month for me. I only lost a few sessions to errands. The sessions I did have were quite productive That means I wrote 178 pages this month. That's all of 2 pages over what I would have done if I'd only written to my goal of 4 pages per session. This has been a great month!

However, I'm sure March isn't going to be as strong. I'm going to lose about a week to Planet Comicon. I have one final Jake Bonner book set to release in April, so editing that will take some time as well. I do think I'll continue to be productive when I do write, because I've got a work that's flowing well at the present time. As long as it flows, I think I'll be good.
Posted by Robert Collins at Monday, March 02, 2015 No comments: