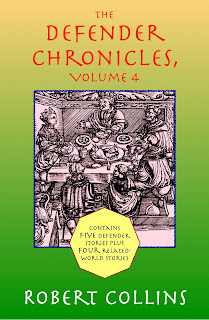 Two more works in my Defender series are out, a print book and an ebook. First, the print book, Defender Side-Stories:

Here are four novellas set in the world of the Defender.

The first two tell of the dramatic changes that happened long before the Defenders arose when magic was weakening. The second two involve the present fate of the Witch Lands, and how magic and knowledge might improve the lives of those who live there.

If you’re a fan of the Defender series, you’ll want to read these novellas that fill out this world!


The second is the ebook, The Defender Chronicles, Volume 4:

This volume contains Defender stories 31 to 35. Also included are four novellas set in the same world. Two take place in the Witch Lands, and two in the distant past, when magic was in decline.

You can find store links to both these works at the Defender series page. The series is almost complete...