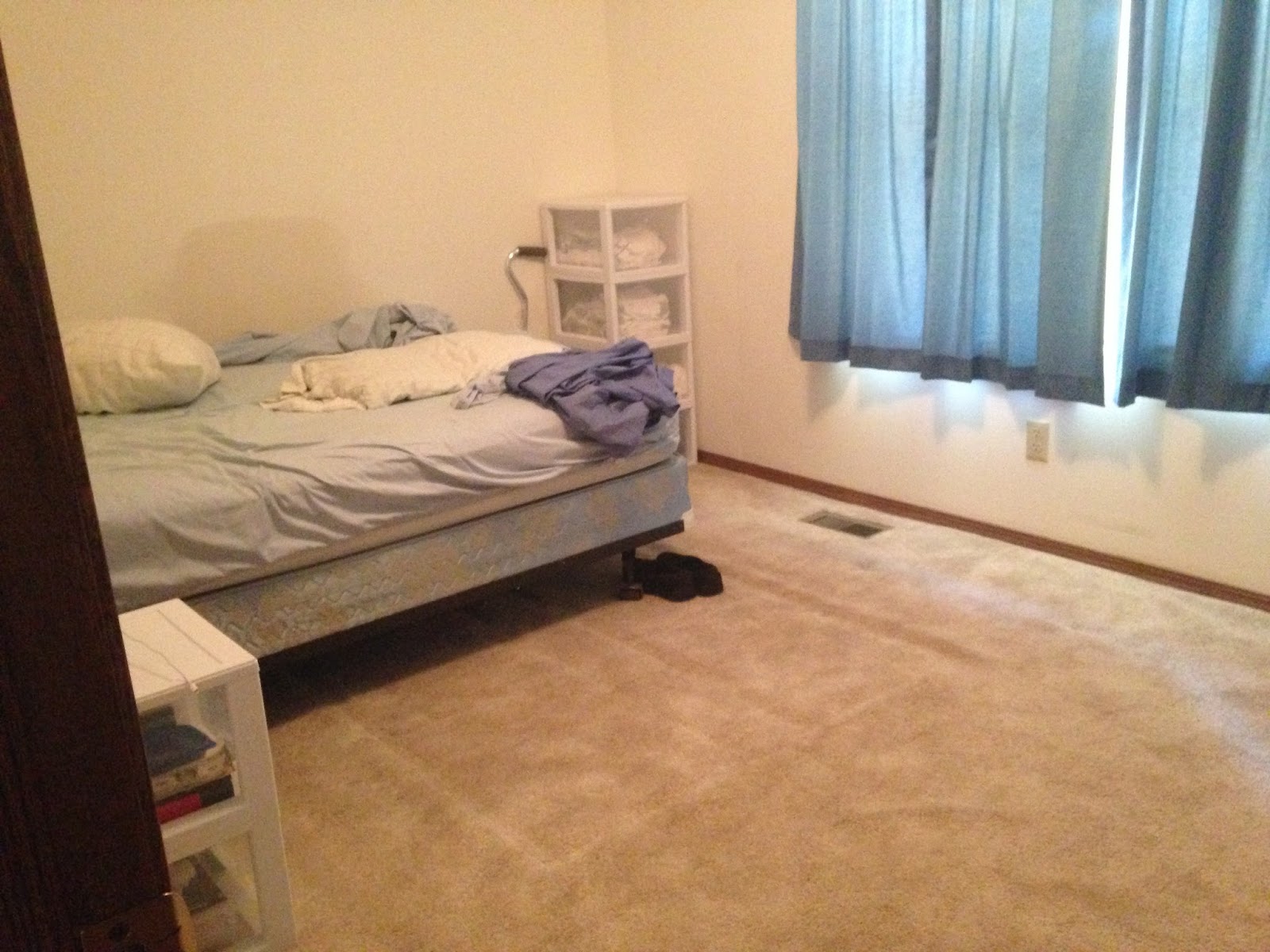 I've had an interest in the tiny house movement for a while now. Recently the FYI Network began airing a series called Tiny House Nation. I'm nowhere near ready to move into a new place yet, but watching the episodes did get me thinking about my stuff.

There was still quite a bit of clutter among my possessions. I had letters from people I'd stopped hearing from 10, 15, even 20 years ago. I had gifts from book talks that I couldn't associate to a specific talk. I had business cards that I was sort-of collecting, though not really.

The matter of efficient use of space also popped into my mind. You might be able to see in the photo the impression in the carpet that my old waterbed made. (I only had it for 10 years, and it's been gone longer than that, but it was so bulky that the impression is still there.) My bed was in the center of the room, with the head of the bed against the wall. The arrangement took up a good chunk of room space.

Sometime back I tried getting a bit more space out of the room by moving my chest of drawers next to the bed (right side of the impression). It was okay, but there was one drawer I wasn't using, and it wasn't easy to move.

For a time I tried using plastic drawers to carry my books to events. The problem with them was they tended to slide open at inopportune moments, like in the trunk of my car, or when I was bringing them into the event space. I ended up using them for storage around the house.

While watching the show, it hit me: why not use those drawers to store the things I wanted out in my room? Why not use the other plastic containers I have to store everything else, and put them in the bedroom closet? Why not move the bed to get more space in my bedroom?

I went through the stuff I'd accumulated and tossed what I didn't want. I moved some of the plastic drawers to the foot of my bed, and I have another stack beside my bed. The possessions I kept are in bins in the closet, along with my overnight bag and cooler. I now have enough space in my bedroom that I could move my computer in there if I wanted to.

(I don't right now. The room bleeds heat in the winter, and I need a space heater to keep the room from getting too cold. There isn't space for a desk and something to put the heater on, and not have the heater get in the way.)

I feel like I have better control of my living space. I feel that much more freed from having stuff.

I know this downsizing isn't for everyone. But it's worth considering, even if all such thoughts do is make you ask what you'd keep and what you wouldn't if push came to shove.
Posted by Robert Collins at Tuesday, September 23, 2014