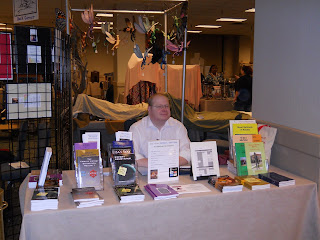 I spent Memorial Day weekend in Kansas City for ConQuest 43. It was a great convention!

First off, I sold about as many books this year as last year. Unlike last year, my spot was right up front. I didn't catch the eye of everyone who passed in front of me, but I did fine.

Also unlike last year, I signed up for some panels. My Friday panel was about cancelled TV shows. I don't know why I was there, but it was fun to take part. I flew the flag for Police Squad, Sledge Hammer, and Max Headroom. I lucked out on Saturday; I was on a panel with two of the main con guests, Gardner Dozois and Shannon K. Butcher. I had two Sunday panels, but opted out of the second so I could remain in the dealers room.

What's great about going back to a con is seeing people you haven't seen in a while. It was good seeing everyone, chatting, or getting to talk for some length of time. Writing is mostly solitary, so I try to enjoy the opportunities offered at cons.

I will fess up to dropping my Ho-Ho at opening ceremonies. I am not coordinated in any way. Yes, a picture was taken.

I went back to Room-Con this year. I actually stayed for an hour and half. For someone who doesn't drink and is usually in bed around 10, I think that's good. For the second year in a row, my room was on the same floor as Room-Con; in fact it was a few doors closer.

One other thing I did was try to get the word out about Encounters. I didn't have flyers, but I did send some people the site link or let them copy it off of my iPad.

Once again the hotel was the one downside. Sheraton took over the old downtown KC Hyatt. For some reason they chose to have their renovation of the hotel going on at the start of the summer travel season. Parking was the pain it always is. Wifi was weak but working. It felt like the prices in the restaurant went up, especially for the breakfast buffet.

Hotel notwithstanding, I will go back next year. I'll keep going to ConQuest as long as they'll have me.

Next up is SoonerCon. I plan to make a few calls to bookstores next week, so there might be some events added to the schedule. I'm hoping to put up a new post between now and SoonerCon.