Wow. It's been something like six weeks since my last post. Well, I've been busy, and I caught a sinus virus, and I strained some muscles in my right hand, and did I mention I've been busy? I'll try not to let so much time pass between now and the next post, but no promises.

So, I've done my first events for the Kansas 1874 book since the last post. First was a signing at The Book Grinder in El Dorado on March 26. Just a few books sold, but I had a good time. This black and white cat hung out with me for a good part of the day (the other two cats in the store slept in one of the comfy chairs.) 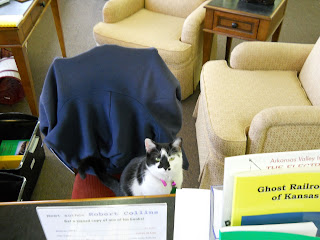 Next was a book talk on March 29 at the Marion City Library. Turnout was between 15 and 20 people, and I sold several books. It rained a little that night while I spoke. Oddly enough, the last time I spoke there it rained that night too. I think they now know who to call if there's a drought...

Also on that trip I placed books at the Mennonite Heritage Museum in Goessel, at the library in Hillsboro, and at the Bookshelf in McPherson. I may have some additions to the schedule to relay later due to those efforts.

Then on Sunday the 10th I was at the "Meet the Authors" event at the Kansas Originals store in Wilson. Several other authors were there including Max Yoho and Cheryl Unruh. Several of my books were sold. I also got to talk to a few people about self-publishing. I hope what I said was encouraging.

This weekend I'll be at the Oklahoma City Steampunk Expo. Hope to see you there!
Posted by Robert Collins at Tuesday, April 12, 2011